Back when I was a parent to just one child, back in the days before Liam was born, when it was just me and Benjamin together every day, I used to get overwhelmed sometimes. I would get frustrated and tired, too. We had many, many good moments and good days, of course, but I was often left, at the end of the day, feeling like I might not be up to the job of being a parent — it was just so hard.

And then I had Liam, and after I got over the initial shock at having two children who both wanted my attention 24 hours/day and whose schedules and behaviors were completely uncorrelated (although that improved with time) things have kind of became the same — I have lots good moments, and good days, but also lots of days where I feel overwhelmed and frustrated and tired and sometimes I worry that I might not be up to being a parent.

(The first few weeks after Liam was born were a real shock. At first I thought, “How hard can it be? There’s two of them, sure, but I’m pretty much doing the same things for the second one that I’m doing for the first, right?” The problem with that logic is that yes, you just do the same things, but you do all of them twice as often and at completely unrelated times. It’s not like there’s “diaper time” and they line up to get changed. No — child 1 wants lunch exactly when child 2 has a poopy diaper and while you change that child 1 has broken a toy and while you fix that child 2 spilled the milk and while that was being cleaned up you burned the lunch which you completely forgot about . . . and so on, ALL DAY. My joke with Dan was that having a second child was like being employed full time at a job you liked and then taking on a second full time job that you also liked but that was completely different . . . and trying to do them at the exact same time. Imagine being a short-order cook while also being a telemarketer SIMULTANEOUSLY. That’s pretty much what it’s like.)

The thing is, after everything settled out and I figured out how to do the “mom of two” thing (as much as I have figured it out), I find that I don’t feel MORE frustrated or overwhelmed or tired than I did before, which is kind of surprising. I feel pretty much the same amount under water as the mom of two as I did as the mom of one. 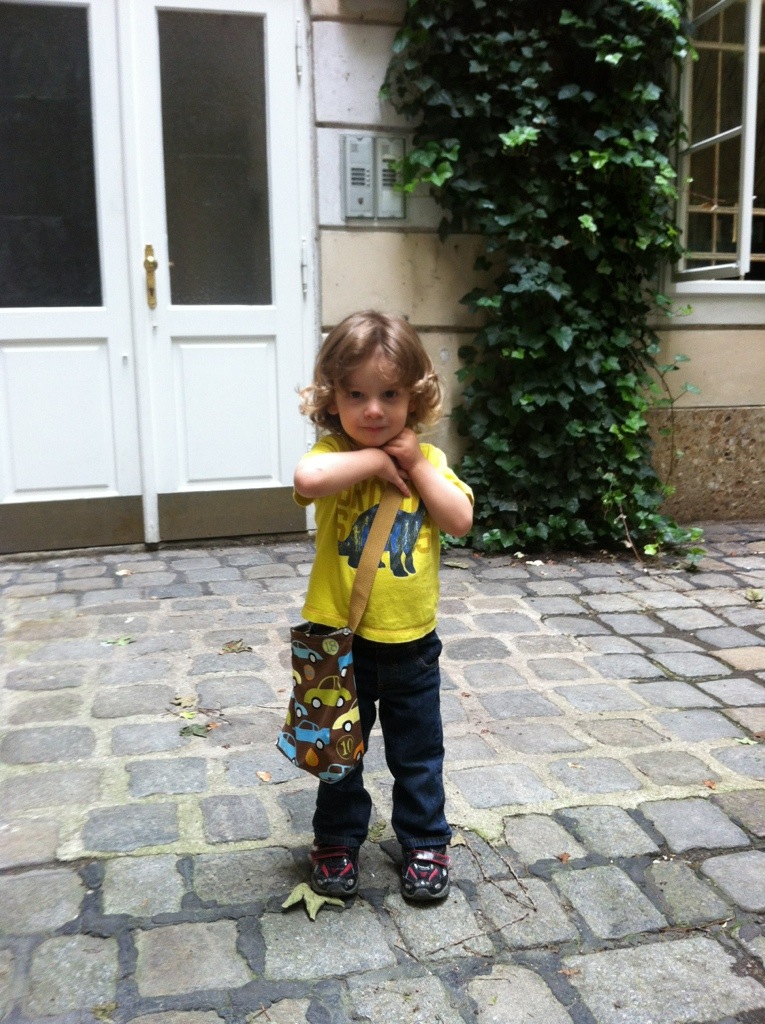 That’s kind of nice — having two kids doesn’t diminish my number of happy days or happy moments (in fact, it adds to them, because I have twice the brilliant, beautiful, joyful energy in my life). And a major plus side to this is that sometimes, for just a little while, I’m only responsible for one child. Today, B is on an all-day field trip. Dan is picking him up at 4, so from 7:15 – 4:30, it’s just me and Liam. And, since I’m used to being mom-of-two all the time, being with just Liam for the day is a piece of cake. I miss B terribly, even though he’s only out for a few extra hours, but in the meantime, I’m impressed to find out how capable and resilient I feel dealing with the toddler dictatorship one-on-one. Chicken nuggets for lunch? No problem! You want to carry the brown bag to the store? You got it! You want to climb all the way up the stairs (twice)? Sure! Want to play race cars with me all morning? Yep!

When I think back to when Benjamin was 2 1/2, I know I didn’t handle the day-to-day demands and requests as gracefully as I can handle them now, even though we were one-on-one all the time. I understand that it’s because of the experience I’ve gained and the perspective I’ve acquired. But it’s also the “Too Much Noise” principle (if you haven’t read that, you should): things that used to be trying often seem pleasant after we’ve had to face larger challenges.

So for today, I’m missing Benjamin (and trying not to worry too much) while I’m also enjoying the novelty of feeling so calm, patient and capable as a parent. (Maybe the trick to feeling like a great mom is to borrow someone else’s child for a while — if I practice with three, then I ought to feel like two is really easy . . . right?)