A couple of weeks ago, when we were in Salzburg, we stopped by a little town near our hotel for dinner.  On the way back to our car, Benjamin and Liam froze, wide-eyed and completely captivated by a window display of a toy store.  As a parent of a 4 year old and a 2 year old, this is nothing new.  I was preparing to round them up and herd them back down the sidewalk when I took a closer look at the display.

It was an entire window display scene of Playmobil dolls and toys, all very clearly set in the Alps.  And it was fantastically cool. 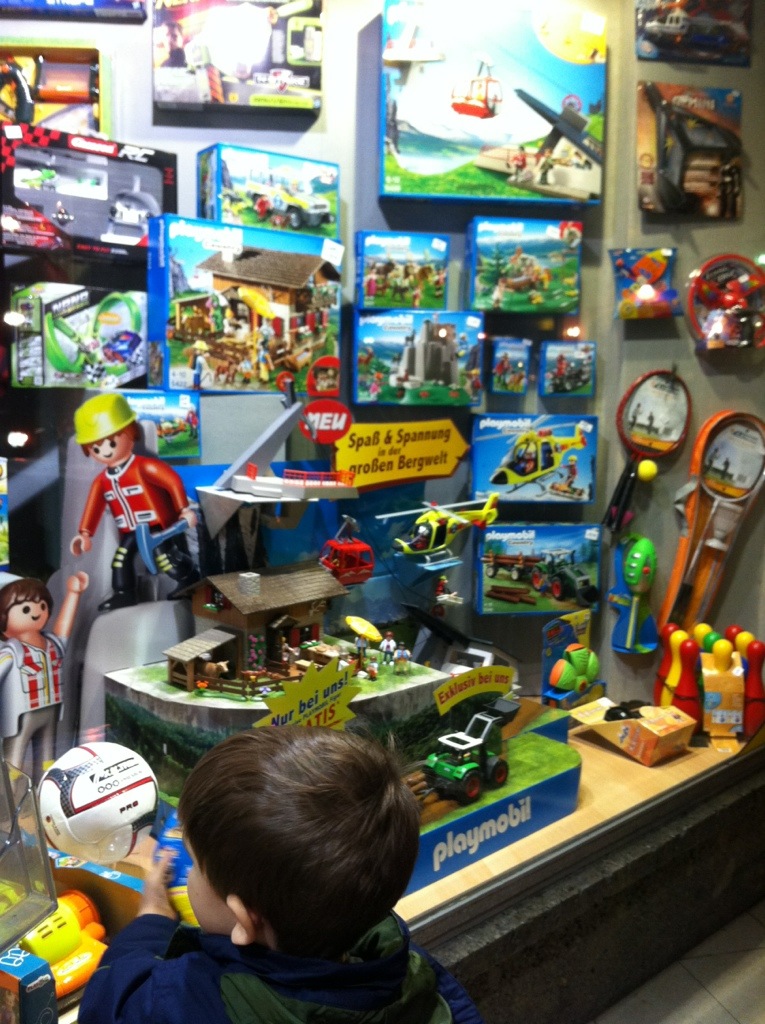 There were mountain cable cars, perfect little Alpine homes and restaurants, mountain climbers, mountain rescue helicopters, hikers (with the type of walking sticks I’ve only ever seen in this part of Europe), cows with wreaths of flowers, and dolls in dirndls and lederhosen.  They all looked just so perfectly Austrian.  I’d never really seen anything quite like it. I was as enthralled and giggly as the boys, gazing at the display and discovering tiny details.

After getting home and doing some research, I came to find out that Playmobil is a German company (which I didn’t know, because I was familiar with them in the US, and had never seen any toys which particularly gave away their origins) and that they usually release their toys first in this part of Europe (Germany, Austria, Switzerland, etc.).  Then some (but not all) types are released in the rest of the world, including in the US.  So, although I’m skeptical that these Alpine toys will ever be released in the US, if they ever are, it won’t be until next year at the earliest.

I’m kind of glad that the shop wasn’t open, because I suspect I would have gone in and gone on a little Austrian toy shopping binge that probably wasn’t necessary.  I do think, though, that the boys may receive a few of these for their birthdays, or maybe for Christmas, this year.  I think they’re fantastically cute, and I think they’ll probably be a great way of helping the kids hold on to some of the memories of their experiences here.  (And, at the very least, Mommy wants to play!)