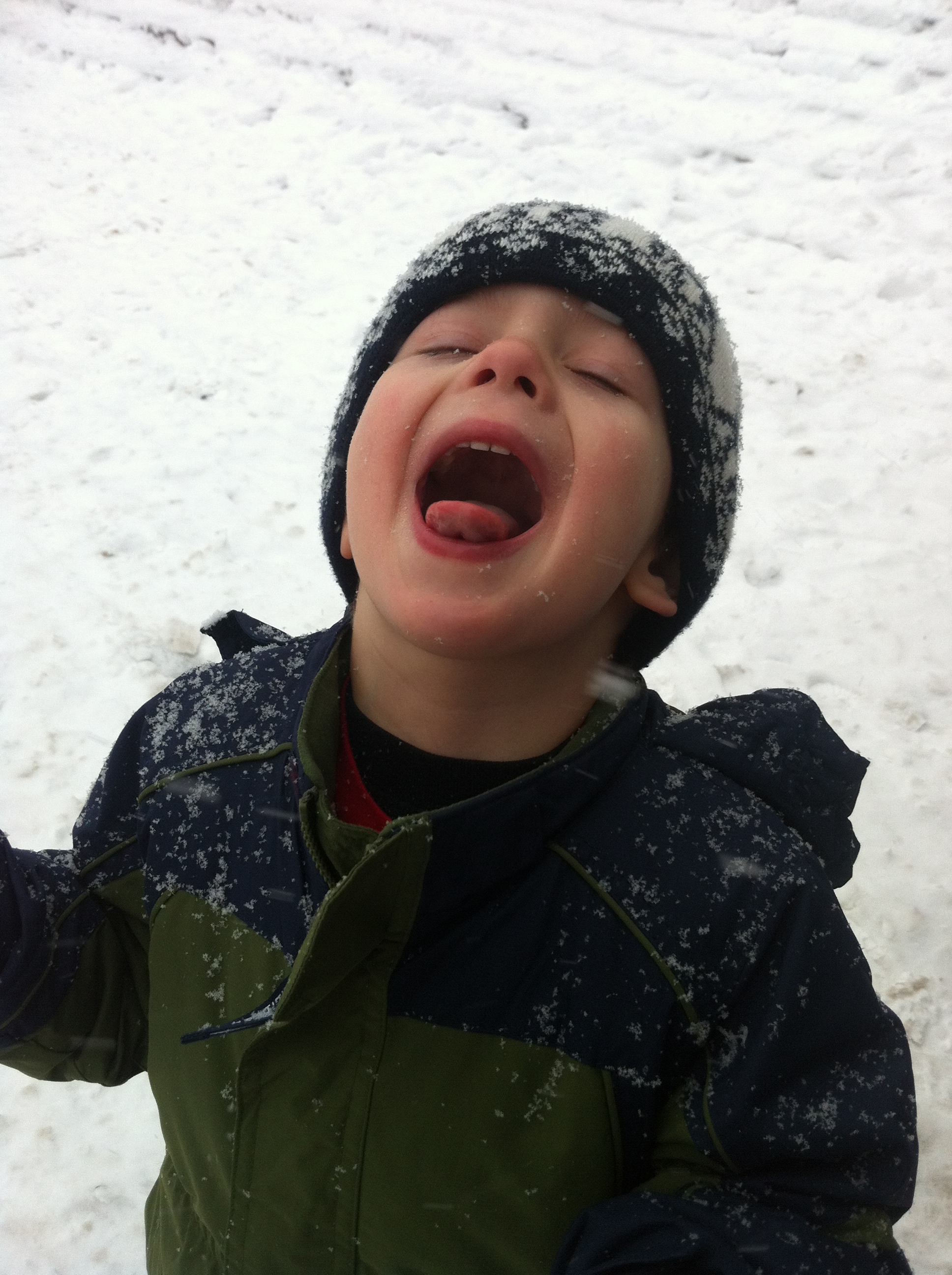 I feel like I never know what the weather is going to be like here.  The forecasts that I get on my phone are notoriously inaccurate, and relatively lacking in detail.  So, although I saw that we were supposed to get some snow here this week, I expected a dusting, or rain (because that’s what’s been happening lately when the forecast has called for snow).  Instead, we woke up yesterday morning to several inches of snow on the ground, and it’s pretty much been falling since.

I think this is a great thing.  I love the snow.  And, having no car and nothing to shovel, there’s very little downside to getting inundated with snow.  So, I say, bring it on.  My kids agree.  Benjamin loves walking in fresh snow.  He loves looking back and seeing that his footprints are the only 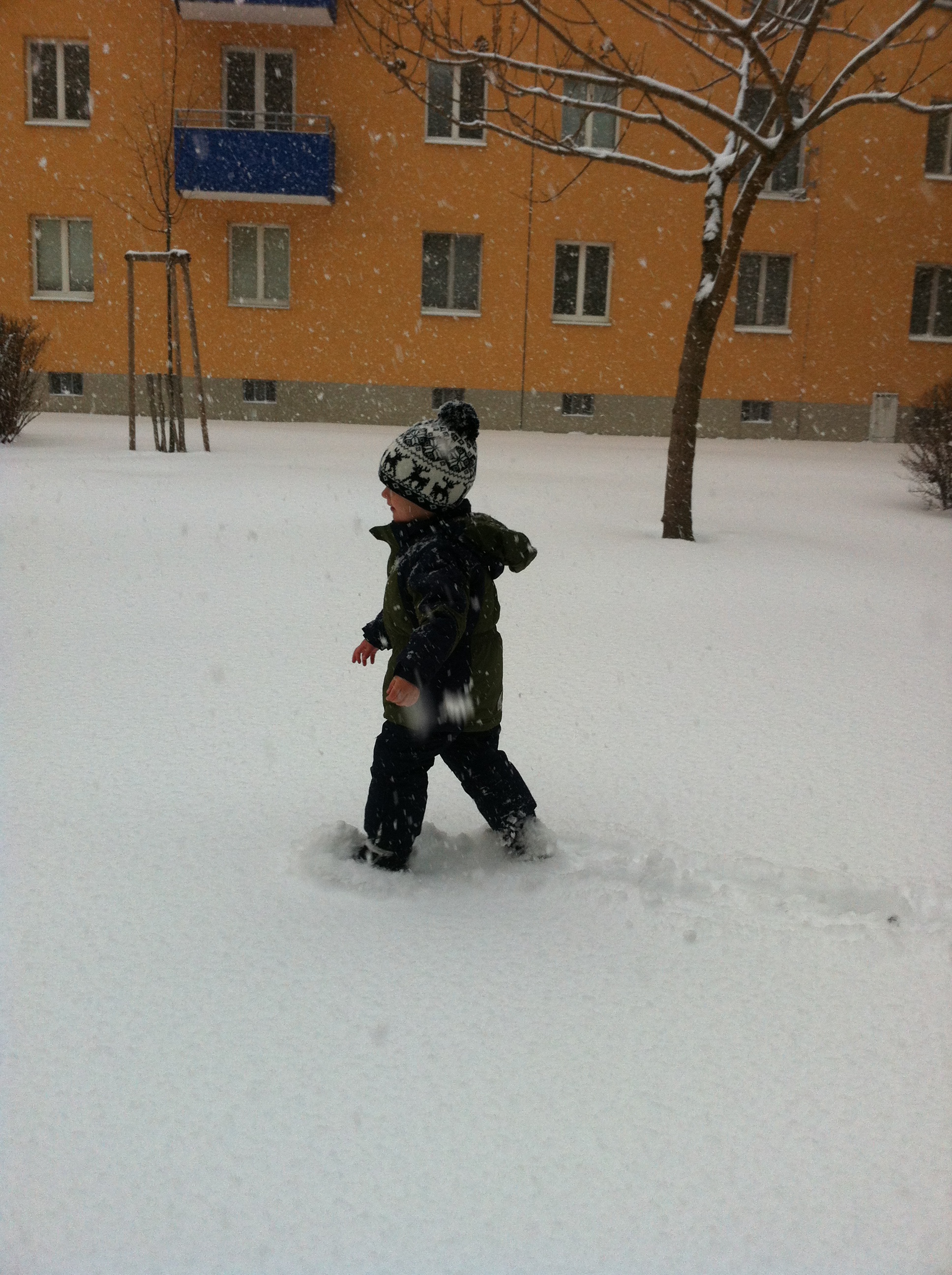 ones through a smooth, otherwise unbroken area of fluffy whiteness.  He loves throwing snowballs, making snowmen and catching snowflakes on his tongue.  At his preschool, they play and sled outside on snowy days, and that has made snowy days some of his favorites at school.  Liam loves the snow, too.  He loves to go for walks in the snow (well, he loves to go for walks anytime) and he treks from one slushy puddle to the next, jumping up and down and making himself an icy mess.  And he loves to throw snowballs, squish snowmen and eat snow. 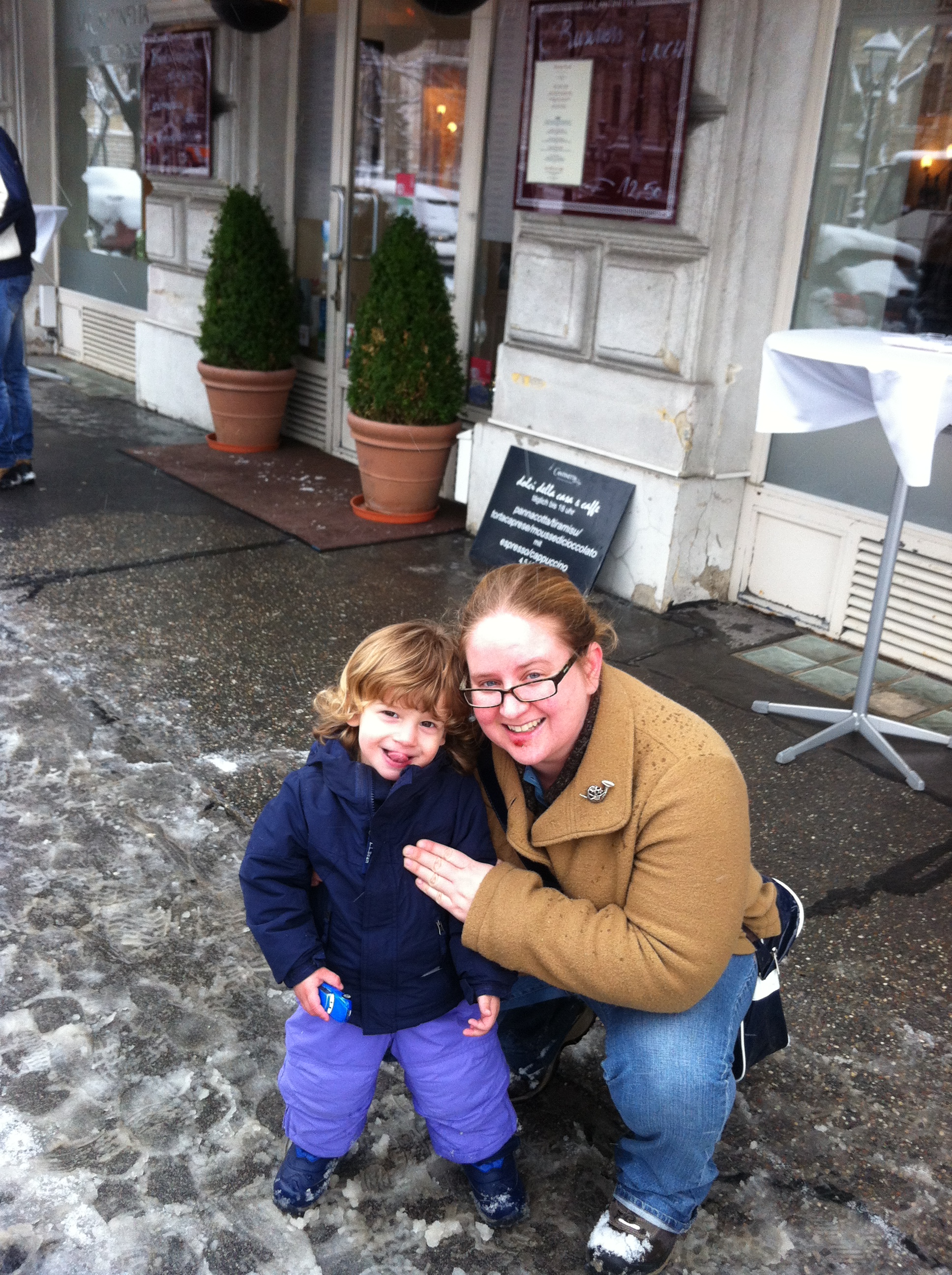 Right now, I’m sitting in my living room and watching the snow fall outside.  By the time we went out yesterday to play on our terrace (which is open to the sky, but warmer and more sheltered than a real “outdoors” area, so we often don’t get any snow accumulation out there, even when there are several inches elsewhere), we already had 5.5″ on the ground.  And, since it’s pretty much been falling since then, and is supposed to fall through tonight, I don’t think the estimates of up to 10″ that I’ve seen seem unreasonable.  (Of course, they do a pretty good job of clearing the snow around Vienna, so I haven’t seen any one place with nearly that much accumulated.)

Yesterday, B & I walked out the front door to go to school, and there were already about 4″ of snow on the ground.  He exclaimed, “I love the snow!  My heart thinks it’s great!”  I agree.  My heart thinks so, too. 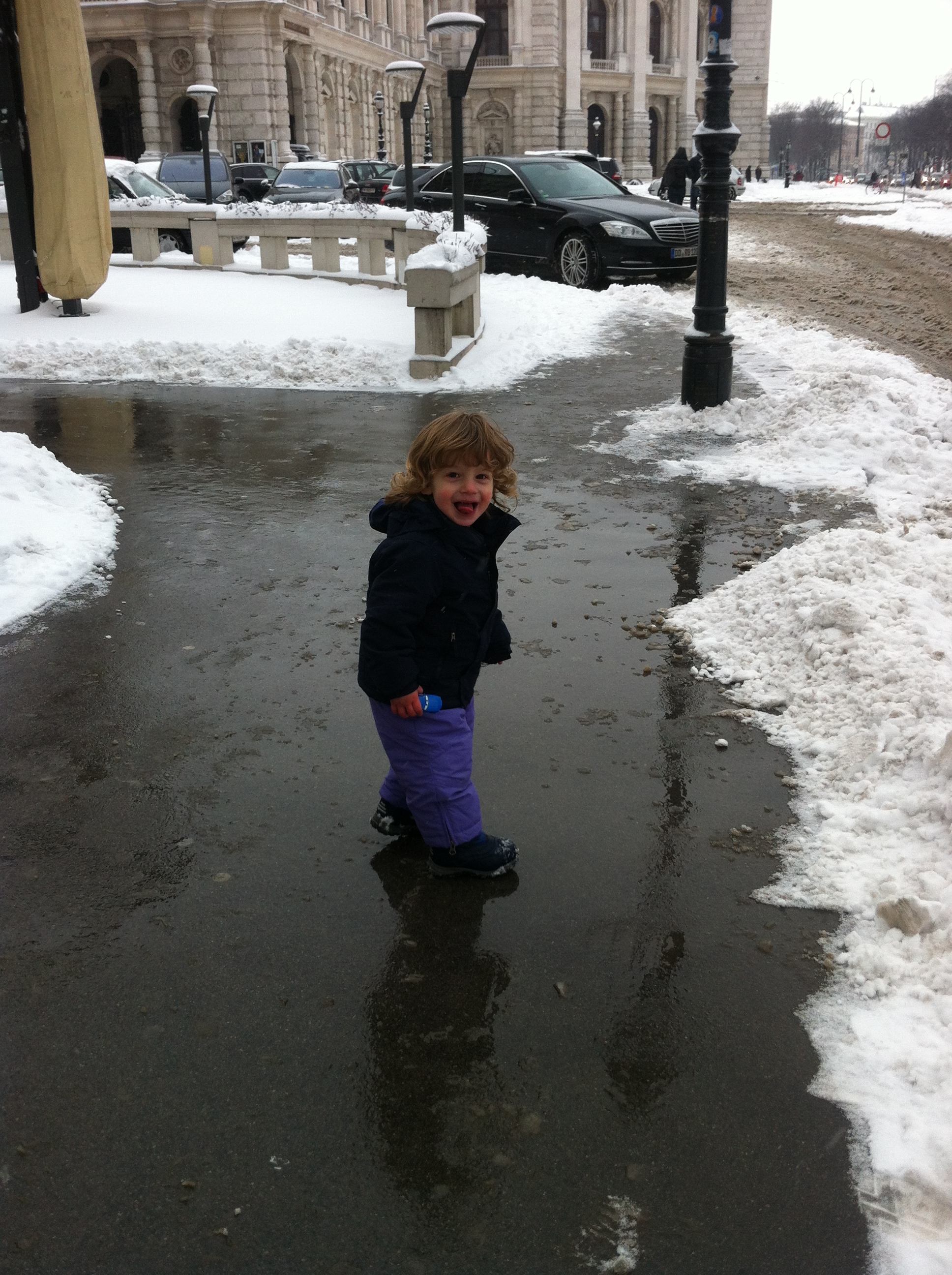 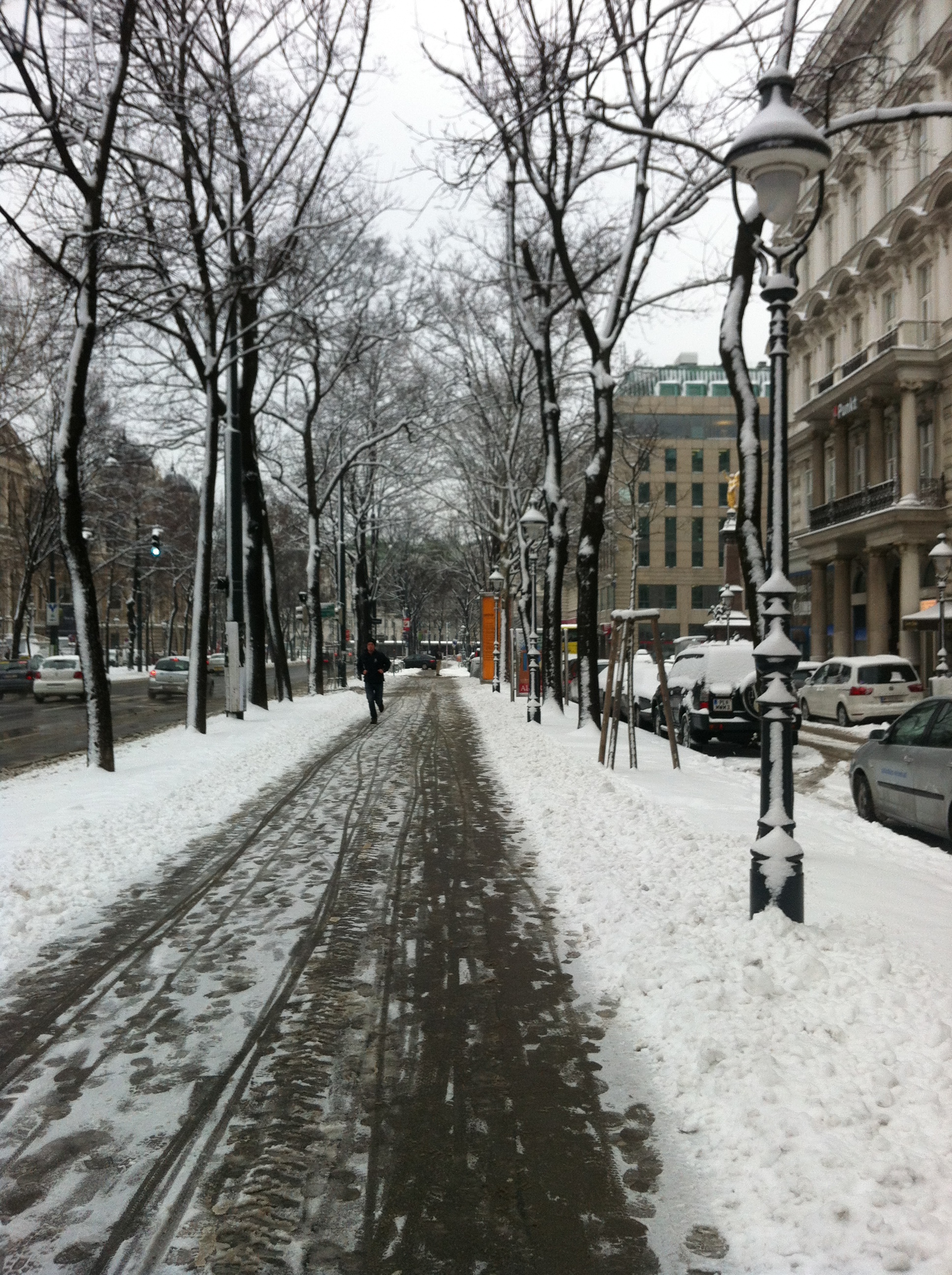