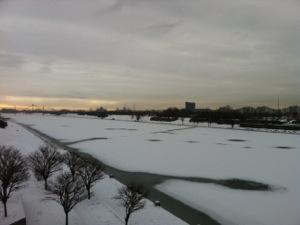 As I’ve mentioned before, Vienna in winter is not the snow-covered city that most people seem to imagine.  I, too, was surprised to learn how little snow typically falls here, and how close, climatically, in many ways Vienna is to my home in the US mid-Atlantic.  It averages a little bit colder here (about 5 Fahrenheit degrees lower high temperatures during the winter, on average) so we certainly get plenty of cold weather here — especially when coupled with the often intense wind.  However, it’s a lot drier here — we get significantly less precipitation here, throughout the year, than the DC area weather I’m used to.  But, since it’s colder, when we get precipitation in the winter months, it’s usually snow, and when we do get snow, it tends to stick around. 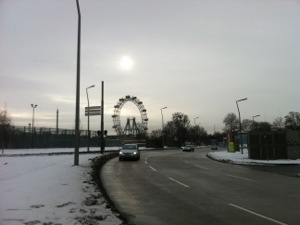 We had a pretty significant snowstorm here about 12 days ago (just as we were leaving Vienna to go skiing).  We’d been getting little bits of snow, almost daily, for a few weeks leading up to the big snow, and we’ve gotten a little bit of snow several times since then.  And nearly all of it has stuck around, since only one day in the past 2 weeks has had a high temperature above freezing (and then, it was only above freezing for about an hour).  Over the past few weeks, we’ve gotten pretty used to the scene of Vienna alternating between fresh whiteness and the less lovely gray/beige of days-old snow that has been sanded, gravelled, and walked in by many feet.

Back at home, the weather often feels like it can’t pick a season.  It’s perfectly expected that a heavy snow or ice storm may be followed, within days (if not hours) by springtime temperatures and sunshine.  But not in Vienna.  We’re just a little colder, and a little drier, but typically, winter stays winter until it’s time for spring.  So today, when the rain started falling, it was very strange.  Just as the temperatures came up above freezing for the first time in a while, the rain started to fall.  It looked, sounded and felt really foreign.  Just the sight of it on the windows was odd, and the splashing in the gutters and on the roof felt like a completely alien sound.

It’s just another one of those little differences that you don’t notice until it happens and then it feels so very strange.  I’ve acclimated to winter in Vienna, I suppose, and my brain wasn’t expecting rain.