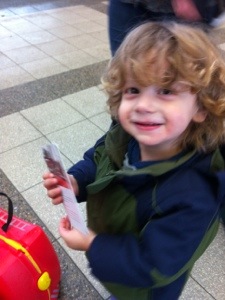 We woke up this morning to several fresh inches of snow in Vienna, and more falling. It was a perfect day for heading to the Alps to go skiing . . . which works out, because that’s exactly what we had planned for this weekend. It was pretty exciting to have plans that agreed so well with the weather.

We finished the packing and trekked snowily off to the train station. (Apparently there was enough snow today to snarl Vienna’s roads, and the mountains were even worse — glad we were taking the train!)

It was a perfect day for an Austrian train adventure. We were all nice & cozy on the train while we watched the snowy world go by. Although there was so much snow falling, on the ground and being kicked up by the train, that certain parts of the trip just looked like white on white. 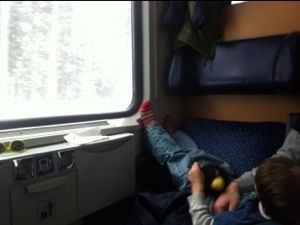 We’re pretty seasoned in train travel with the kids, but we had never ridden in an enclosed compartment, which we got to try today. It was excellent. The compartment had 6 seats, and unless there was not a single other seat on the train, it was pretty unlikely that anyone was going to choose the empty spot in our compartment. So, we got a whole little room to ourselves for the entire trip. We could talk, the boys got to watch some shows on the iPad and play angry birds (with sound!). We even played catch for a little while. And when Liam fell asleep, we were all quiet so he could rest. It was nearly a 5 hour trip, but it was the best and easiest train trip we’ve had so far. 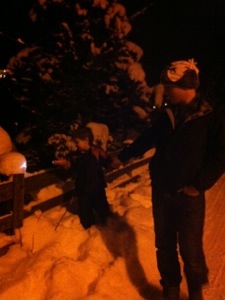 Until the part at the end, when Dan, who was repacking everything in the suitcases, hit his head on a reading light and cut himself. (Requiring our first task in Alpbach to be finding a doctor to glue Dan’s forehead back together. He really is fine now.)

From what we can tell (in the dark), Alpbach is darling and surrounded by mountains . . . which we will be sliding down tomorrow. I’m a little freaked out. They still have their Christmas lights up here, which is awesome.

It’s certainly been an adventure so far.