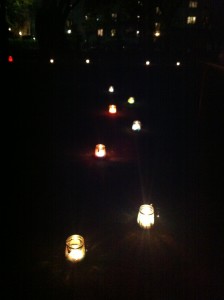 Yesterday evening was Lantern Fest at Benjamin’s school.  It was our second chance to watch Benjamin participate in Lantern Fest, and, again, we really enjoyed it.  As I understand it, these Lantern Fests happen all over Austria (actually, throughout much of central Europe) and although the tradition is loosely based on the story of St. Martin (who tore his cloak in half to share it with a poor man who had no cloak of his own), really primarily involves listening to small children sing songs and watching them parade around with lanterns that they make at school.  It’s sweet and darling, and we love it. 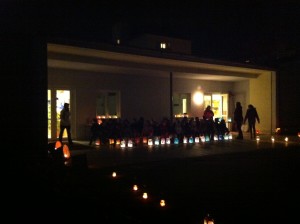 Last year, B struggled.  He’d only been in school for 2 months, and he pretty much hated it.  He’d had trouble learning the songs and following along with the instructions . . . because, of course, everything was in German.  He held hands with one of the teachers for a fair bit of the parading, and fell apart about halfway through and came to stand with me for the remainder of it.  Even so, he remembers it fondly (as do we) and I think it ended up being mostly a positive experience for him — even though it was tough, he was part of something fun at school, and that was really the first time that had happened. 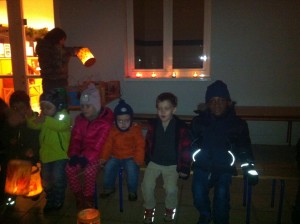 It’s amazing how much a year can change things.  B did great.  From before we arrived, he was so excited.  When we got there, he greeted his friends with a hug, and went running off down the hall once he figured out where to go.  He happily joined his class to line up and get ready, and although he was still looking for us, once he saw us, and we waved to each other, he went back to playing and joking with his friends.  He did so well.  He walked along with the parade, he found his spot (waved to us again) and then sang all the songs.  He wasn’t nervous or worried (although he got a little tired at the end) and he was so excited about how well the whole thing went. 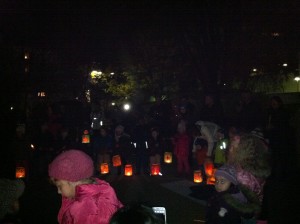 We were thrilled, too.  I was so happy to see him enjoy himself and to see that he seems to feel so comfortable there.  It was great to see how confident and self-assured he was.  I loved seeing him playing with and talking to his friends.  But best of all, at the end, he didn’t want to go home.  He still complains that he doesn’t want to go to school sometimes, but he truly does seem to have found happiness there.