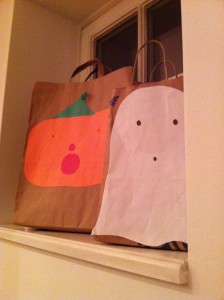 Being our second Halloween in Vienna, we felt much more prepared this year.  We knew we would go trick-or-treating (weather permitting, and the weather did cooperate), we knew where we would go (near the American International School in Dobling, the 19th district) and we knew how we would get there (or so we thought — we got waylaid using public transportation AGAIN this year).  So, we decorated treat bags for the kids and got them dressed in their costumes.  We didn’t go super elaborate on the costumes for the kids this year, and Dan & I didn’t wear anything that would count as a costume, because last year, the average level of enthusiasm and participation was pretty mild.  Of the adults, Jo was the most dressed up, with some devil’s horns and a red feather boa, but I thought she might be a bit overdressed compared to the other grown ups that would be there. 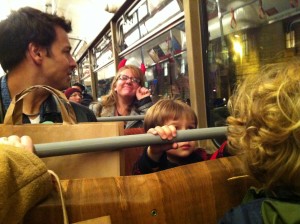 But, wow, were we surprised.  Even just since last year, things have changed.  Vienna is catching on to this whole Halloween and trick-or-treating thing.  We went to the same neighborhood as last year, and visited many of the same houses.  We arrived earlier than last year (when we actually got quite lost on the way) and encountered WAY more people trick-or-treating — probably 10 times as many as we saw last year.  The average age was a lot higher, too (particularly surprising because we arrived over an hour EARLIER than we did last year).  Most of the kids we saw were in the 12-15 year old age range, with a few closer to 8 and a very few younger, like around 5.  Other than one little girl we saw, our kids were definitely the youngest out trick-or-treating (although we saw several young kids helping to hand out candy).  With our slight misadventure on the way (missing a bus which put us half an hour behind schedule) we definitely arrived later than we’d intended, but we were still pretty surprised to see so many older kids out, and so few young ones. 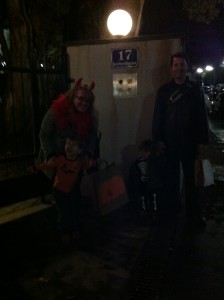 A lot more of the kids were in costume this year, and many of the costumes that we saw were remarkably elaborate.  There were still a fair number of older kids not in any type of costume at all, but that didn’t seem to get in the way of their candy collection.  The average costume was more spooky rather than cute, even for the younger kids — some of the masks we saw were downright scary, and were probably being worn by kids younger than 10.

By far, most of the kids were out with none, or very limited (like parents waiting at the end of the block) parental supervision.  There were a few moments where things got a little too rowdy for the littles ones (Liam and I were narrowly missed by a thrown snowball) and in general, there wasn’t a ton of the “trick-or-treat etiquette” that we’re used to at home (although maybe we’ve just been lucky).  In general, the big kids weren’t keen on waiting for the little ones to finish their slow process through saying “Trick or Treat!”, receiving the candy, thanking the giver, and then admiring the decorations, costumes and/or treat bags.  They didn’t exactly push, but there was a lot of impatience.  We also saw a lot of shaving cream and silly string that had been spread around liberally (even at houses that were giving out treats) even though it was really early in the evening.

Among the houses along the route, the conventions we’re used to weren’t followed, either.  There were several houses with lit pumpkins and porch lights on where no one was home (or at least, they didn’t come when we rang the bell) and a few houses that did give out candy that had no outward indication that they would do so — we only knew because we saw other people there, collecting treats. 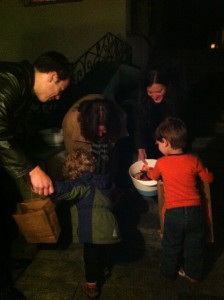 We had a great time, and the level of enthusiasm we saw was really fun.  Along with lots of extra trick-or-treaters, there were more houses giving out candy, and the ones that were seemed to be better stocked than last year.  (We visited several houses last year that ran out unexpectedly early, and they seem to have been prepared for the vastly increased onslaught this year.)  Several of the houses were much more thoroughly and spookily decorated (complete with elaborate scenes in the front yard, creepy music and costumes).

Trick-or-treating (and Halloween in general) are definitely catching on in Vienna, but most of the people we encountered, both trick-or-treaters and candy-giver-outers were still Americans, and those who weren’t were mostly English speakers.  But, there were definitely more German speakers participating this year than last. 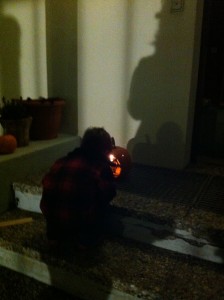 In all, we probably visited about 15 houses that gave out candy — just the right number for a two and four year old who were walking the whole way.  My boys did great — saying “Trick or Treat!” and “Thank you!” at every house, helping each other out and walking the whole way.  (Liam refused my offers to carry him, even after we were done, and wouldn’t let anyone else hold his candy bag — “It’s mine!” he told us.)  We had another fun Halloween trick-or-treat adventure in Vienna, and we feel like we’re helping to blaze a trail and set the precedent.