Mostly, I plan our vacations. Generally, Dan helps me pick where in the world we go, but once the destination is selected, I pretty much decide which towns we’re going to go to, which sights we’re going to see, and how long we’ll stay in each place.

There’s usually one thing Dan wants to see on each trip — when we went to Paris, it was the Eiffel Tower; in England he wanted to “see a castle”. For this trip, our barely-Germany trip, Dan requested a stop at the Audi Factory in Ingolstadt.

Today, that’s what we did. We had to hustle to get out of snow-covered St. Koloman in order to get into Germany (yay!) and up past Munich in time for the once-weekly English language tours. 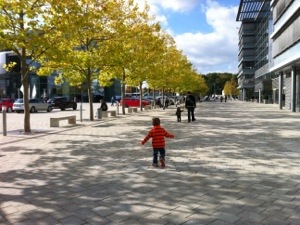 I went into this mostly to indulge Dan — it was not expensive and only about an hour out of our way — but I really enjoyed it. We saw the press shop (where they use massive machines to stamp metal sheets into parts of cars), the assembly line (which is partly automated with cool robots and partly run by people with a lot of well thought out mechanical assistance) and watched a video on the painting process (the cars get flipped — albeit very slowly — through the paint to ensure that no bubbles form).

It was really cool. 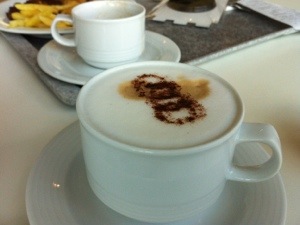 The entire process of manufacturing the cars is incredibly precise and yet completely flexible. They make different types of cars on a single assembly line, and a computer system ensures that the right parts and tools are available when and where they’re needed. Efficiency and ergonomics are the priority, and every little detail has been well thought out. Where heavy lifting is required, robots do or assist in the work. Where a human eye or touch is needed, that’s who they use, and no one has to bend or stretch or lift very far. The cars are lifted up and transported overhead to allow the floor to be open for people and machines to move the parts. The facility is massive (larger than the country of Monaco) and they employ over 30,000 people. It was impressive.

The part of my mind that loves order, organization and efficiency was thrilled, and the part of me that likes to see cool engineering was very satisfied. I’d love to see a more detailed tour of another part of the factory (I’d also love to see how a different company, like Honda, addresses the same processes.) 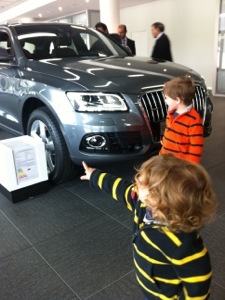 The kids did great. Audi provides strollers for the tour (it was a long walk, and also not the kind of place that kids should run around). The boys loved it — the robots were fascinating and seeing a car come from a stack of metal sheets was pretty neat. 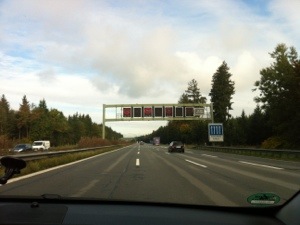 Also, to get there, we drove on the autobahn, which was an interesting experience. Most cars drive at pretty normal speeds, but every so often we had a car (or a short line of cars) blow past us like we were standing still. There really is no speed limit, except where the electronic sign slows everyone down to 120 or 130 km/h (75 or 80 mph). It works because everyone strictly follows the rules. We finished our day with a drive south, back to Austria. We had a great day. It was a pleasantly unexpected surprise.