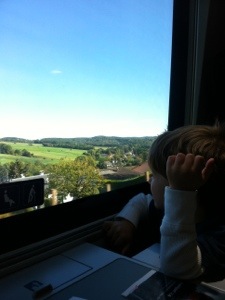 We left Vienna today on our way to Salzburg. What a beautiful train ride! I really like traveling with the kids by train. Austria has a great rail system which allows us a ton of flexibility in scheduling, and we can get up, move around, eat, use the bathroom and enjoy the scenery during the entire trip.

And for this trip, the scenery was particularly lovely. We got to take in all the beauty of the rolling hills, the cuteness of the Austrian villages, the yellows and golds of autumn and the stark slopes of the Alps, all on a trip that took less than 3 hours. 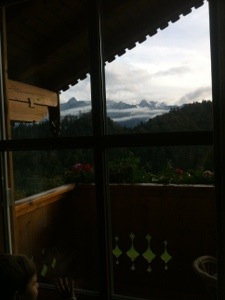 And things only got better once we arrived. We’re staying in the mountains outside of Salzburg, on a working, organic farm. We’re situated most of the way up a mountain, looking across a little valley at some very large, snow-dusted peaks, surrounded by the colors of fall as well as chickens, cats, cows and tons of rabbits. Our entertainment this afternoon consisted of watching our hostess milk the cows — and later, enjoying the resultant milk as a snack. 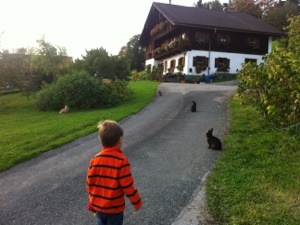 After dark, we took a short walk to gaze at the stars (which were brighter and more numerous than I’ve seen in a long while, even on a cloudy night) and then took a short drive (Benjamin’s idea) to peer down at the sprinkle of lights that mark the town down in the valley.

It’s chilly out here. I felt silly for packing parkas, boots and hats when we left a reasonably warm Vienna (60 degrees) this morning. But being out here, where autumn has definitely arrived, it makes sense.

So far, I am loving this trip. And we haven’t even seen anything of Salzburg but the train station.