I love Scotland. I wish we were staying longer. And I’m really enjoying Edinburgh — I wish we’d gotten more of a chance to see more of it, in particular.

My number one destination in Edinburgh was the castle, though, and we got to go today, which was a nice surprise — I had heard it wasn’t open on Sundays, but it is! 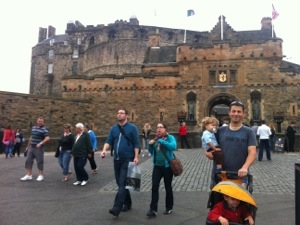 Edinburgh Castle sits at the top of a
huge (apparently volcanic — I learned lots on the tour) rock formation overlooking Edinburgh. It’s massive, gray and forbidding — very appropriate for a castle. We looked all around, had lunch, took a brief, informative and funny tour (well, B and I did, while Dan and Liam followed along) from our Scottish guide named Fergus, and saw the crown jewels of Scotland.

I had a great time. The views of Edinburgh were fantastic, and the history was very interesting. The castle itself was everything I expected a castle to be (a lot of which is apparently decorative and non-functional Victorian-era additions). It was pretty cool. 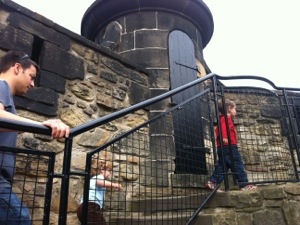 The kids got bored pretty quickly, though, and Dan mostly chased Liam. When I asked B if he liked it, he replied, “It was ok. Why didn’t kings and queens have more toys?” I was impressed with how stroller friendly it was, but I kind of wish they’d had more activities or information geared towards the little ones. 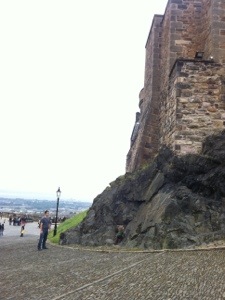 And, at the end, we got a bit more excitement than we intended — Liam fell, bonked his head on a cobblestone, and got a nasty bump. We left the castle in a cab, headed to the ER to have him checked out (he’s fine) by way of a tunnel under the castle (which would have been cooler under different circumstances).

Our time in Scotland has been too short. In retrospect, I think we planned too much for this trip. We’re not getting to see enough of each place we visit, and we’re spending too much time packing and driving and thinking about our next destination. (We’re stopping in 9 different cities on this trip. I think 5-6 would have been better.) We’re seeing a lot, though, and we’re enjoying it a lot, too. Tomorrow, we head back to England — this time, on the east side. I’m hoping it’s less eventful than Scotland has been!