When we first decided to move to Austria, we sat down and came up with a “wish list” of things to do while we were here.  The very first thing to go on that list was a bike trip from Melk to Krems along the Donau.  (It was something we picked up from watching Rick Steves before we came.)  The trip is close to Vienna, and everything we read about it seemed great — easy, accessible, fun for the kids.  We wanted to get to see some of Austria and get a little exercise along the way.  Never mind that I haven’t been on a bike in about 14 years (as it turns out, it really does come right back to you) — the bike trip went on our list and it’s been a priority ever since.

It required good enough weather to give us a pretty narrow window of the year, and it required enough planning that we couldn’t just get up on a nice Saturday and go, so it kept getting put off.

Well, today, we fixed that.  We rented bikes, took the hour and fifteen minute train ride to Melk and rode 40 km down the shores of the Danube until we arrived in Krems, where we climbed back on the train and rode the hour back to Vienna. 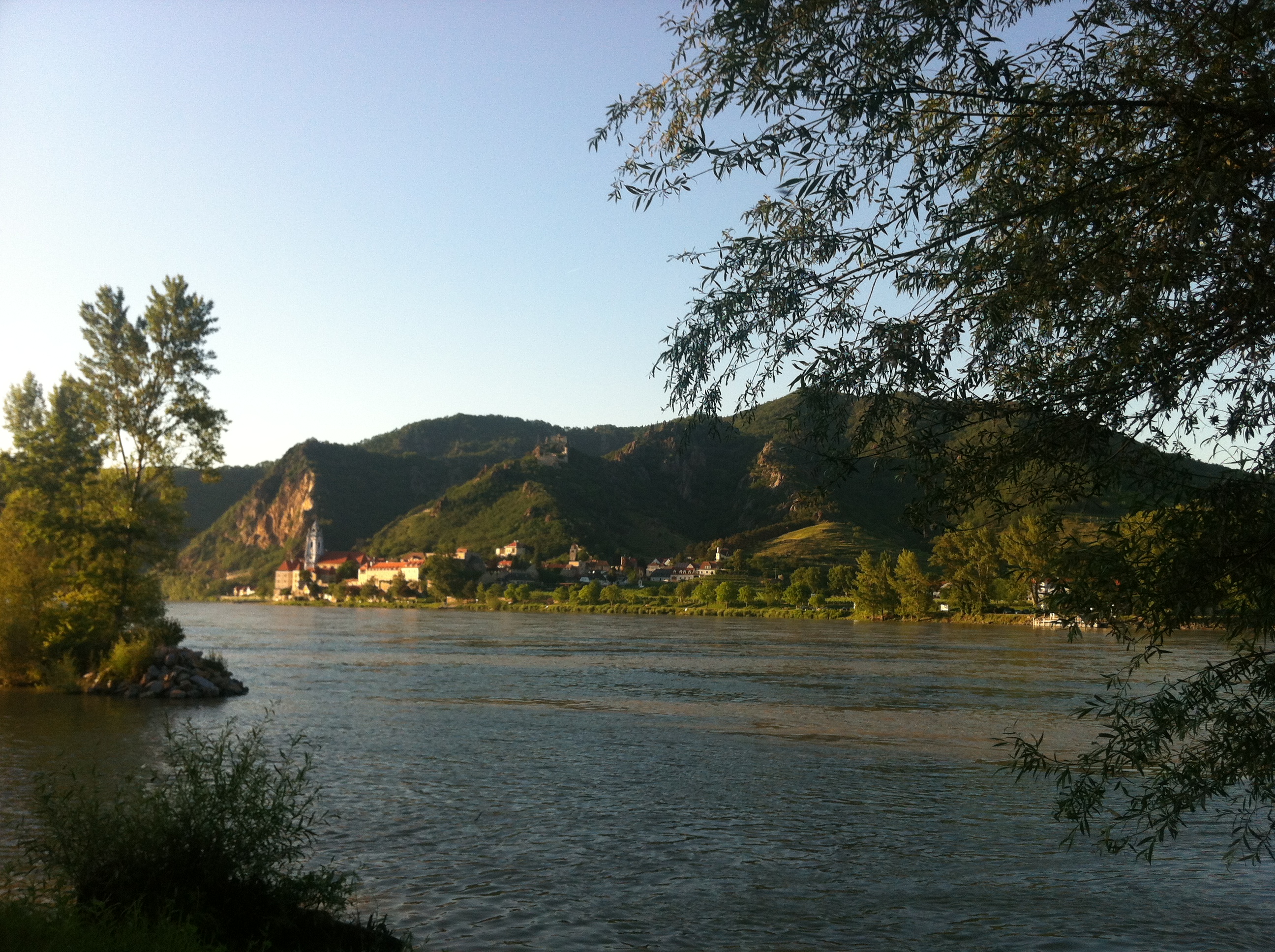 We had a good time.  The area is stunning, in places.  The river is wide, and the towns that dot the river are among the most picturesque I’ve ever seen, one after another, all beautiful.  We saw castles, gorgeous church spires and cute little homes nestled together throughout the Wachau.  The trail is, in most places,a dedicated bike route which is integrated into the landscape — we travelled past farms, through woods, along the river, and right through charming towns.  One of our favorite things was seeing the private homes which had hung out a flag or a sign advertising an available room for rent. Truly, some of the views were the best I’ve seen since living in Europe.  Each town we passed looked like a postcard or a painting. 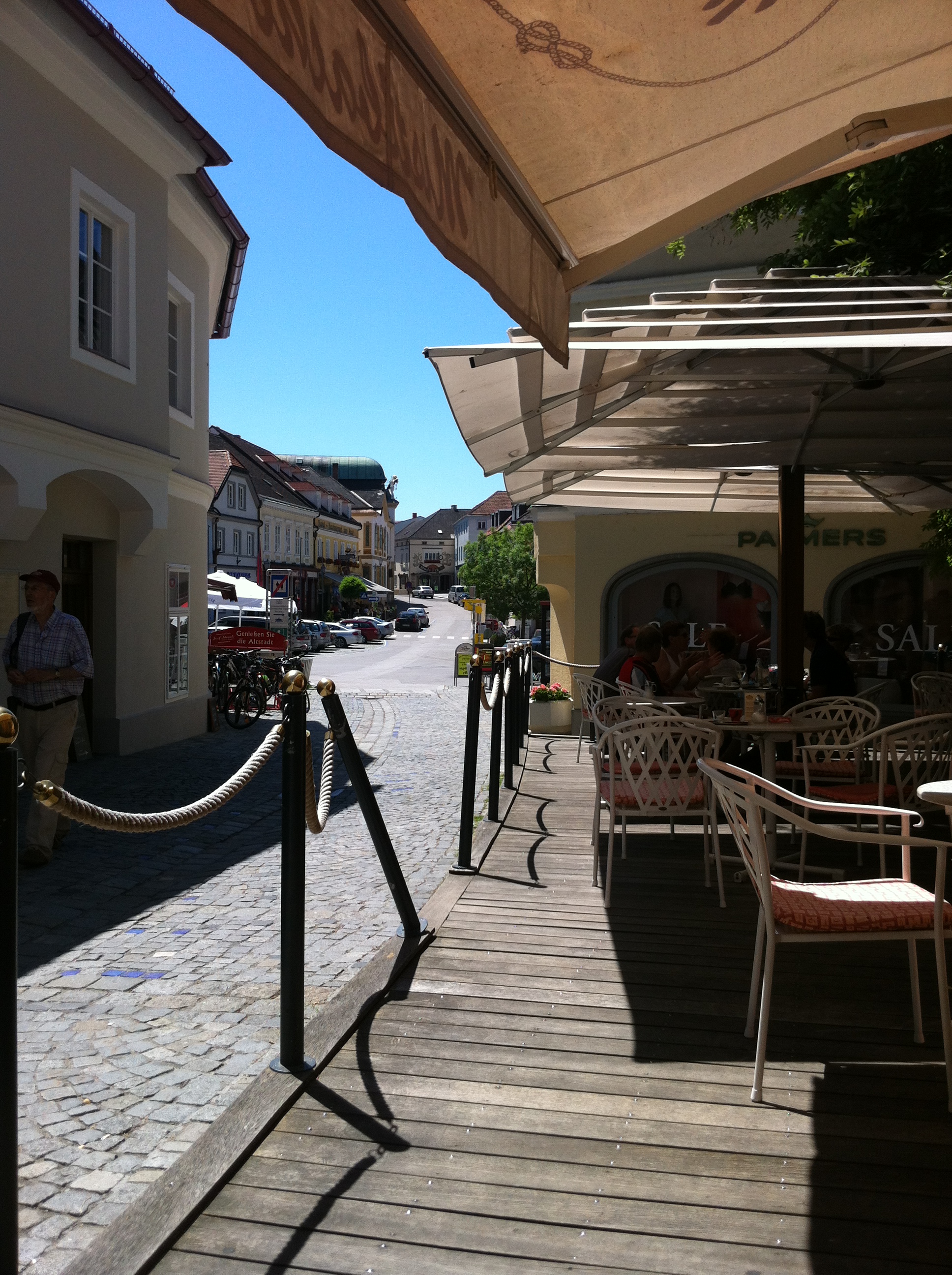 Part of the town of Melk.

The town of Melk, where we started, is very pretty and its famous abbey is impressive and unique.  We stopped in Melk for ice cream and coffee to help fuel our journey, and it was lovely.  We stopped again, for dinner, just before Krems, and had a lovely meal which included many ingredients from farms we had ridden through or past.  The last part of the trip included sections through vineyards, with views of the hills on one side and the late-afternoon sun on the river and the towns on the other.  It was fun to be outside, and nice to travel under our own power . . . while not being limited to walking-with-a-stroller pace.  The river provided cool breezes throughout the day, and we found at least one place (just as we were entering Aggstein) to rest and fill up our water bottles.

The kids had a great time (Benjamin was the most enthusiastic about the trip and the best attitude throughout the day — the rest of us had at least a few grouchy moments).  The boys shared a double-wide children’s trailer connected to Dan’s bike, and they got along all day.  They loved having the wind in their hair, and looking around at different sights and landmarks.  It was fun. 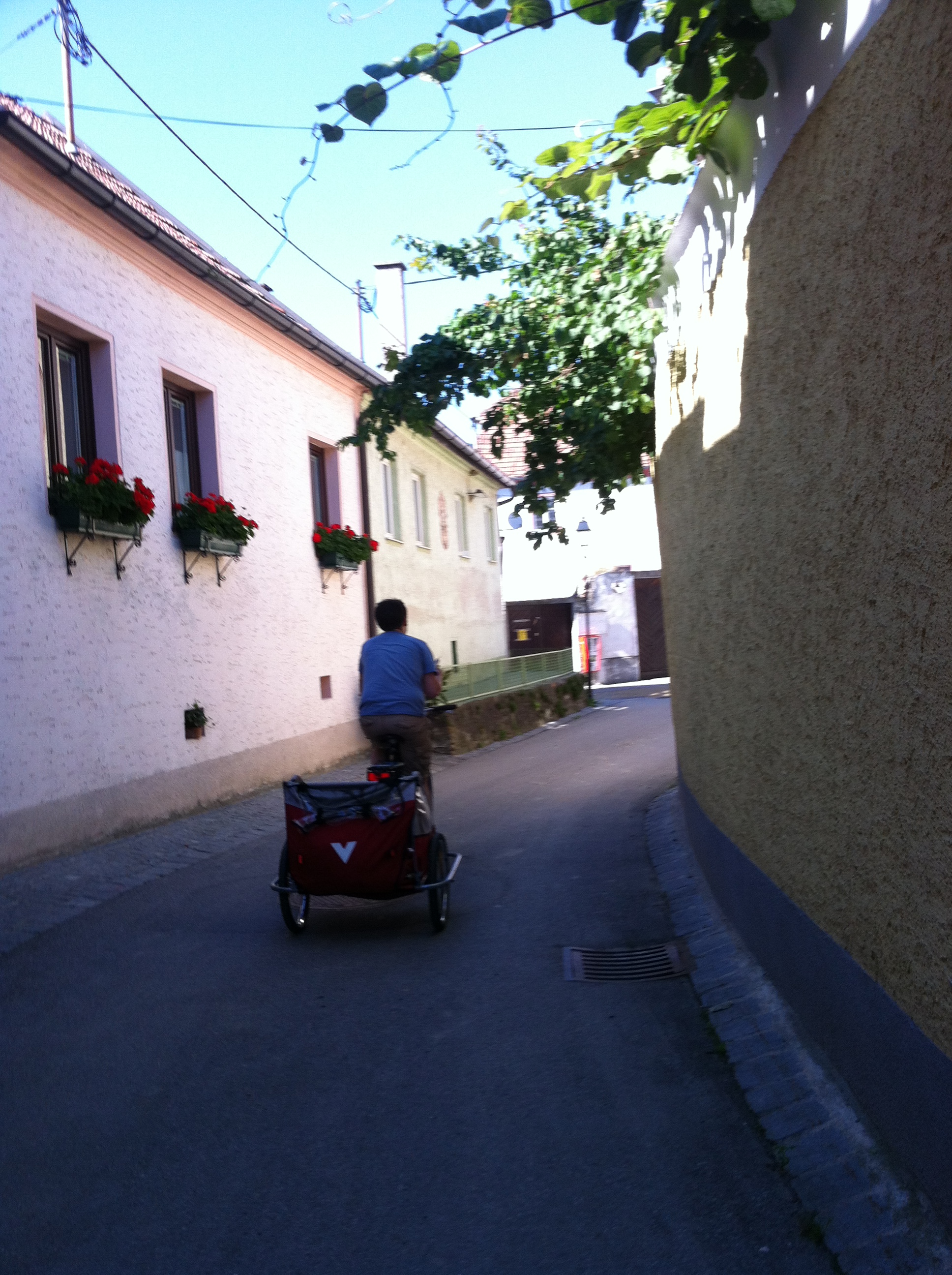 But, it wasn’t really what I expected, and it wasn’t as amazingly wonderful as I was kind of expecting.  40 km is LONG.  It was not the “entirely downhill” route I had read about (although it was, by far, mostly downhill or nearly flat most of the way).  There were a few significantly brutal hills (one wich, near Schonbuhel, actually required that I get off and walk my bike to the top).  Some sections of the trail were very buggy (probably not an issue during other times of the year) and parts of the trail were alongside very busy roads — some of which had traffic that moved at a high rate of speed.  The trail wasn’t particularly wide, so the proximity of the fast cars made me uncomfortable, especially with the double-wide trailer, and most particularly when another cyclist was passing us.  Some of the trail was actually *on* quiet neighborhood streets — which wasn’t awful, but not what I expected.

Today was hot (hotter than the low-to-mid eighties that were forecast), and long sections of the trail (sections between Aggsbach and Spitz, for example) had almost no shade.  Those parts were hard because the kids got hot and cranky, and there was nothing we could do to relieve the situation.

Our stop for dinner was tasty, but with typical Austrian service (slow) it contributed to us just barely making the very last train back to Vienna.  Overall, the trip took longer than I expected — we left the house just after 9 this morning, and didn’t return until after 10 at night.  The ride itself was over 4 hours, plus a 2 hour stop for dinner, a stop for coffee, almost 3 hours to pick up the bikes and get them to the train station, an hour (plus) up, an hour back … not sure where the other time went (the bikes haven’t even been returned yet — that’ll be tomorrow).  The kids had to be really patient — a lot of sitting still and being passive — on the train, on the bikes, at the meals.  That’s not easy when you’re 1 and 3. 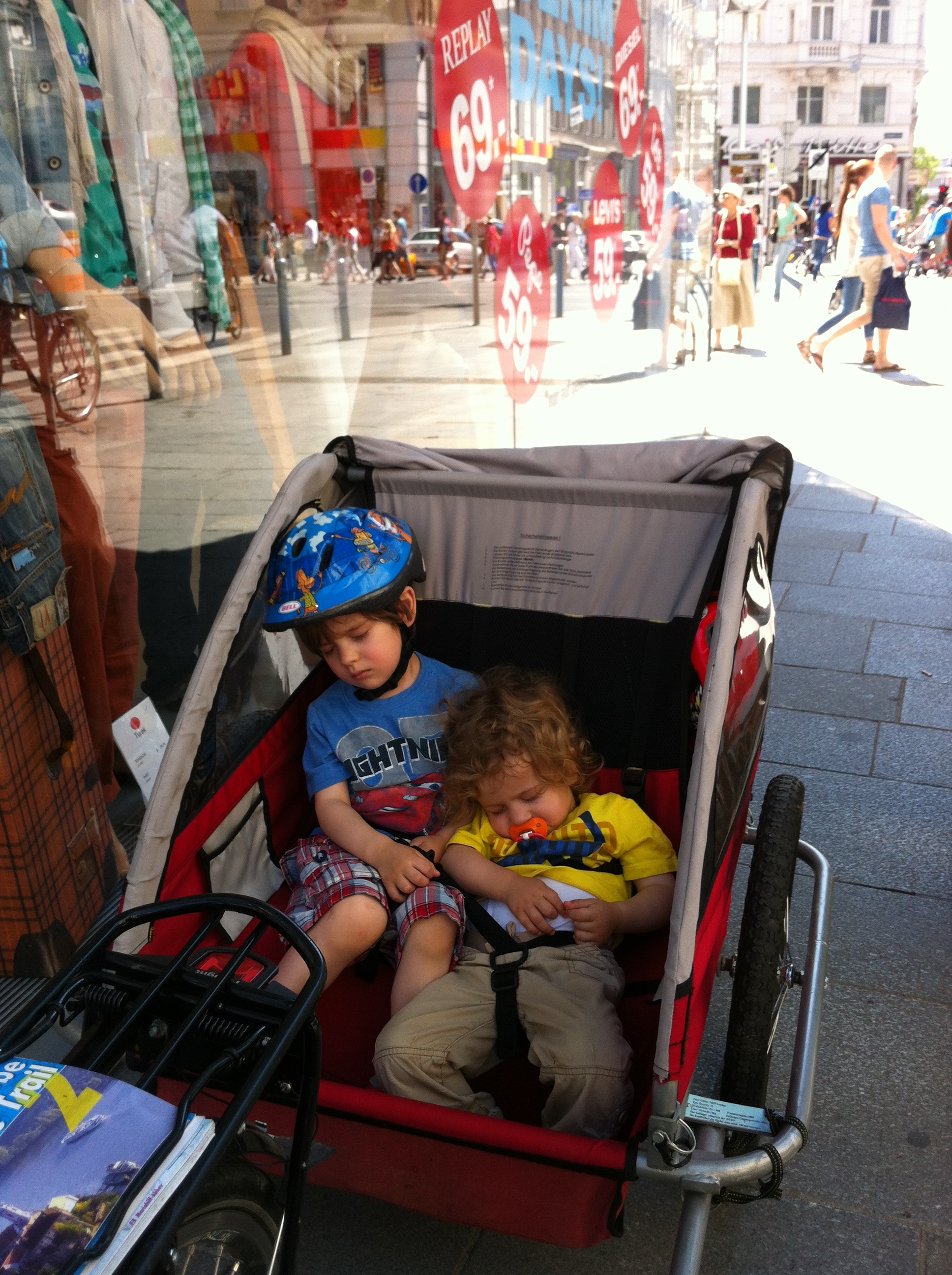 My sweet guys — we were still in Vienna!

Overall, though, the single hardest part of the trip was getting the bikes from Vienna to Melk.  Getting through Vienna (from the rental place to the train station) was harrowing in parts and then fitting the double trailer on the train was difficult (we managed, though).  The bikes, although relatively comfortable to ride, are big and heavy, and hard to maneuver on and off the train. It’s not fun to wrestle them (especially when also trying to wrestle children).

We had a good time.  But, I don’t think I’d recommend this trip to someone else in our situation.  With older kids, I think it would be fun (if they had their own bikes) but then you’d have added stress, especially along the highway-adjacent portions.  For just adults, it’s a fantastic trip, but it was only the fact that my kids get along fantastically and are generally patient that the trip went as well as it did.

That said, if I did this trip (or another like it) again, I’d do some things differently.  I’d bring more water.  I’d rent bikes in Melk (or wherever we were starting from) and either return them to the same place or arrange to have them picked up.  It would have cut hours off the trip and started us off fresh and excited instead of frazzled and worn.  Instead of renting a double trailer, I’d rent one single trailer and a child seat for the back of the bike.  That way, each child would have his own space, and they could switch seats periodically to change things up and give them a new view.  Plus, they’d get good time in with both parents (as it was, I only talked to the boys when we stopped — which was pretty often — or when we ate).  I’d do a shorter trip — I’d pick out the most beautiful section of the Wachau, bike that section, then hop on the train when I was tired.  We didn’t do that because we hadn’t done the reasearch to know what options made sense.  40 km is a lot longer than I thought it was — 25 would have been less grueling.

We really did enjoy ourselves, but it isn’t on the list of things we MUST do again, nor is it on the list of things I suggest for others travelling with their kids.  I’m surprised, because I’ve heard and read such great things about this trip (even from people with little kids).  And, since it SEEMS like such a good idea (see beautiful Austria, at your own pace, and it’s downhill!) I really wanted it to be great.

It was great, but it was more the company that the adventure.

8 thoughts on “Biking Melk to Krems”