St. Patrick’s Day makes me think of my family — especially my grandmother (who was born and grew up in Belfast).  The rest of my family’s heritage is less clear (especially on my dad’s side) — we have some English, some German, some more Irish and a whole bunch of ???, so, as a family, we’ve always considered ourselves more Irish than anything.

However, other than making sure I have something green to wear (a challenge in itself), I don’t really celebrate St. Patrick’s Day.  There were a few years, when I was younger, that I went out with friends.  But, not being a big drinker, there’s not really a lot to DO on St. Patrick’s Day, other than wear my green and reminisce about my grandmother.

This year, St. Patrick’s Day is mainly contributing to my general homesickness for my family.  Being able to reminisce with my family, or even just being in a country that is generally celebrating Irish-ness, is kind of fundamental to St. Patrick’s Day.  Being here, I figured it wouldn’t be much of a big deal — I always had been told that St. Patrick’s Day was really more of an American celebration of Irish heritage than anything else.

Really, though, it seems to kind of be an event — and not just at the Irish pub on the other side of our block.  We took the kids to the playground at the Rathauspark this evening, and I was pleasantly surprised to see the entire facade of the Burgtheater (across from the Rathaus) illuminated in green light.  (I’ve never seen it “dressed up” like that for anything else.)  And, on the way home from the park, we saw many revelers in crazy hats, leis of green, white and orange flowers (as well as lots of rainbow ones . . . but why leis?) and even a few extravagant costumes. 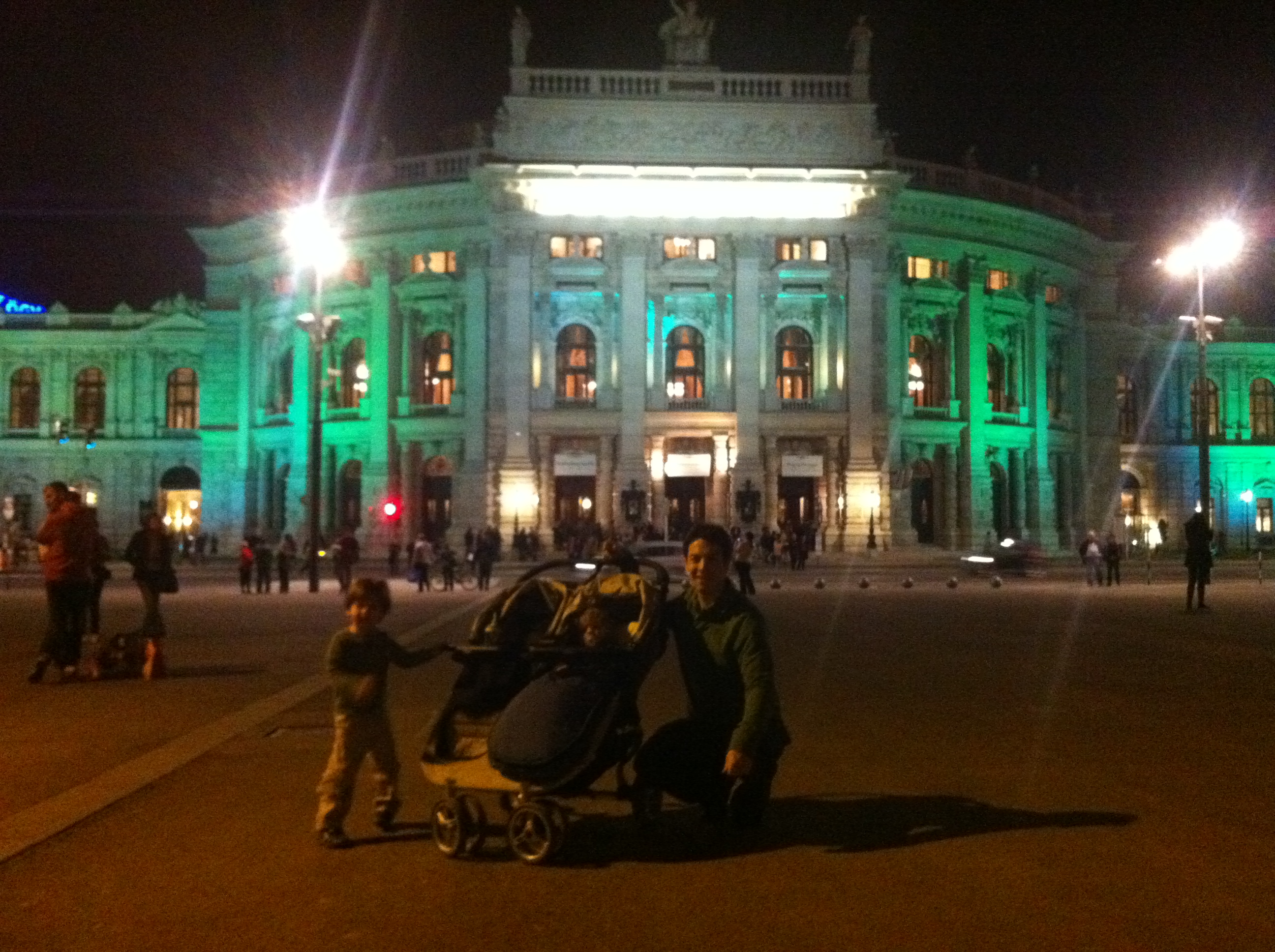 I guess, thinking about it, Vienna does like a good party.  And even though there seems to be a little confusion on the Scottish/Irish distinction* (lots of bagpipes and kilts around, too) they seem to be happy to celebrate Ireland today.  I’m glad.  It feels like home.

* I will give Austria a bit of a pass on the distinction between Scotland and Ireland — there’s a language precedent.  There are many historically Irish areas and buildings here in Vienna (including the street that I live on, as well as the abbey across the street from us) named with the “Schotten-” prefix (Schotten=Scottish).  It’s a Latin/German problem.  In Latin, Ireland was known as “Scotia Major” (basically, big Scotland), so when translated into German, the Irish became Scots.  Therefore, I think a lot of the distinction is lost.  That’s how language works — you can only think of things in as many categories as you can divide them into, and you can’t divide things into categories you can’t name.  So, the Austrians are forgiven their kilts and bagpipes today.  Besides, it’s festive.  And really, the more the merrier.

1 thought on “An Irish day in Vienna”