Yesterday, our stroller died.  Trying to lift it up into the restaurant where we went for dinner, the whole top section, including the handle and the place where the top of the canopy attaches, snapped off.  As frustrating as it was for that to be the beginning of our “Thanksgiving” dinner, I was immensely grateful that it broke in such benign circumstances, not while crossing the street, getting onto or off of a train, or while being carried up or down stairs — all of which are daily occurrences here.  We had that stroller for over 3 years, it carried both of our children on two continents, and it served us very well.  I’m very sad to see it go.  But, much as it’s too bad to be without our daily stroller (and it made getting home last night a little tricky) it really could have been much worse.

I used that stroller every day to carry Liam to Benjamin’s school for pick-up time, as well as for my daily walks around the city.  We have a larger double stroller, but it doesn’t fit easily into our elevator, and is a little big for every day use on the train, so we really needed to get something new . . . preferably before Monday morning.  So today, we shopped.

This is another one of those things that would be a little frustrating at home (“I didn’t really plan to spend my Friday morning stroller shopping, but no big deal, let’s go to Babies R Us and pick up a new one”) but is really daunting here.  We didn’t have the first idea of where to go or what would be available (we can’t really wait for an ordered one to arrive).  We also haven’t shopped for a single stroller in over 3 years, so we weren’t really even sure what was out there, or whether the brands we know would exist here.  We also knew it was possible, if not likely, that wherever we went, we’d be conducting the entire transaction in German — this is another one of those things people don’t really do when they’re on the tour (“Oh, we’re visiting Vienna, let’s buy a stroller!” doesn’t seem to come up a lot).

The internet helped us out — I found a website that recommended a few places for stroller shopping, and we opted to check out the one that offered used as well as new strollers, and even advertised that they could do some stroller repairs.  So, this morning, we headed out to Kinderwagen Sedlak to to some shopping.  (Note: as of January 2013, this shop has gone out of business.) 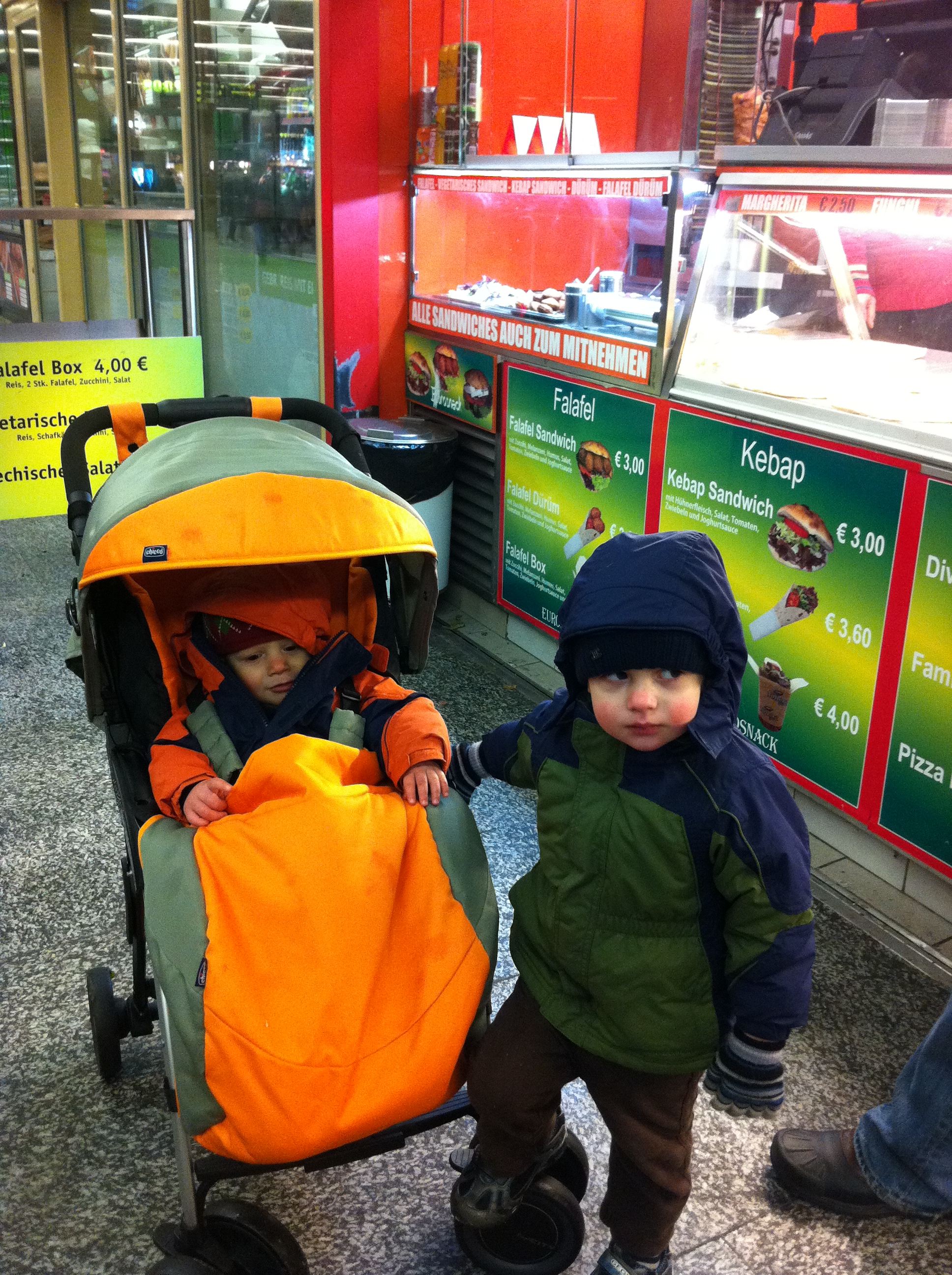 They weren’t able to repair our stroller (which didn’t surprise us) and after a bit of looking around, we settled on a new Chicco stroller.  It has a lot of storage underneath (essential, as we’ve been spoiled by our Graco), can be steered with one hand (which I do every day — because when you’re crossing the street with the stroller and a preschooler, the stroller can’t use up both of your hands), will fit in our elevator (it’s actually a bit smaller than the Graco was) and came with a bunting and a rain cover (neither of which we had for the Graco).  This particular one doesn’t seem to be available in the States, so I’d never heard of it.  It’s orange, which couldn’t be more opposite of our black & beige Graco, but it will stand out in a crowd.  The wheels are smaller than the Graco, which means we’re having to adjust to it being a least a little harder to hop up on curbs and trains.  Its smaller size makes it a little tougher to get on and off of trams, but it weighs less and takes up less space on the train itself, so that evens out, but I wonder how long Benjamin is going to be comfortable in it.

I think it was a good purchase, and we managed to buy it without spending a ton of money, and we did it using our German (the saleswoman spoke almost no English except for “rain cover”).  Both Liam and Benjamin have ridden in it so far and seem to like it — Liam fell asleep in it on the way home from the store, which I take as an endorsement.  It’s another one of those little victories in our big adventure.