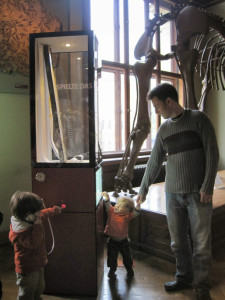 Today is the National Holiday in Austria.  It’s a national day of rest (nearly everyone takes off of work) but it’s also a day to learn about and celebrate all that Austria has to offer:  the Parliament and the National Library hold Open Houses, the military displays some of its major equipment on the lawn in front of the Hofburg, and many of the museums have discount admissions to encourage people to come out.

Well, it worked — people were out and about, all over Vienna, enjoying the city and taking full advantage of the tours and discount admissions.  Dan had off of work, and Benjamin’s school was closed, so we decided to do something fun (and discounted) as a family:  we went to the Natural History Museum to check out their recently reopened (and rumored to be excellent) dinosaur exhibit.  On the way, we walked past the Parliament (which had a tremendous line out the door of people waiting to get in to see it) and when we arrived at the museum, there was a long line, outside in the rain, to get a ticket and get in.  We waited, and got our tickets and went inside, where it was even more packed (I don’t know if I’ve ever seen a museum so populated). 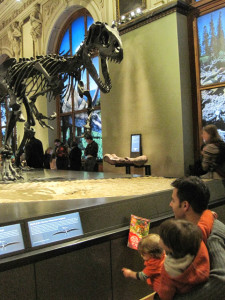 The exhibit was fantastic — Benjamin and Liam were thrilled.  The exhibits were impressive, from skeletons of a giant prehistoric armadillo and a humongous Diplodocus, to the skulls of a Tyrannosaurs and a Triceratops, to a model of a Pterodactyl and a Tyrannosaurus, to a fantastic animatronic Allosaurus.  It was great.  When the Allosaurus model started moving and roaring, Benjamin got very worried and decided that he wanted to go home (until I explained that it was 1) a robot and 2) attached to the table it was mounted on — then he decided it was pretty neat).  I, personally, learned a lot about Ichthyosaurs.  Liam had a great time checking everything out and patting the model of the Woolly Mammoth. 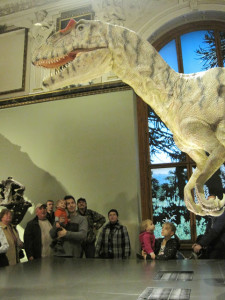 We had a great time and thoroughly enjoyed ourselves.  I noticed that the descriptions on the exhibits (which, luckily, were in English as well as in German) had a very different tone here than I’m used to at home.  Here, things are stated much more absolutely — the layer of soil deposits is “proof” of a meteoric extinction event (at home, I think they would have said, “strongly supports” or “is evidence of”).  Here, there is no “theory” of evolution — it’s just stated as fact.  There is much less equivocation — much less concern about being politically correct (which shouldn’t surprise me, really, after having lived here for 6 months). 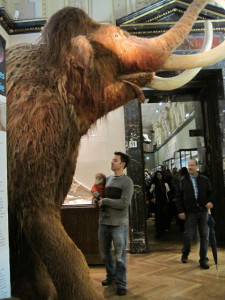 On the way home, we went by the Hofburg and checked out some of the military equipment.  B was fascinated, and really enjoyed getting to climb on everything — he and Dan even waited in a REALLY long line to get to go inside of a portable radar vehicle, which turned out to be his favorite part of his day.  The highlight for me, though, was watching both of my boys be amazed and impressed by the dinosaurs — finding out that they were real, and not just something from cartoons and tv.  It was a great Nationalfeiertag!