Liam is now mobile.  Well, he’s been mobile for a while — ever since he could roll over he appeared to have a destination in mind, and once he started crawling, he was off to the races.  I have seriously never seen a child crawl as fast as he does.  Given that we have parquet floors here, his crawling was even at some personal cost:  he’s regularly gotten blisters on his feet and hands ever since he started speeding around our hard floors. 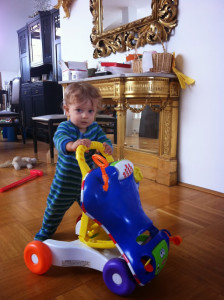 Of course, first thing this morning, when our backs were turned for 15 seconds, gathering up Benjamin’s stuff for school, he toppled over and gave himself a good bonk on his head (of course, he hit the one part of the edge of the entertainment center that isn’t covered by cushioned foam) and he didn’t make any further attempts at walking today.  I can’t imagine he’ll be discouraged for long, though — that just isn’t in his nature.  (It did put a dent — no pun intended — in his other favorite pastime of banging his head on the floor, though, which he usually does at least a dozen times a day.  Every time he did it today, he burst into tears — poor guy!)  By this evening, our living room/dining room/kitchen had become a race track for Liam with his “push car” and Benjamin with his “push bike”.  (Benjamin is faster, but not for long, I imagine.)

I suspect, now that he’s walking, he won’t look back — he’ll quickly overcome his fear of toppling over, and I imagine it’ll be nice to leave the blistered hands and feet in the past.  It’s astonishing how fast things change.  A year ago, I was eagerly anticipating my due date and Liam’s birth, and now, 355 days later, we are miles from there, in so many ways.