Did you know that it’s 4 months until Christmas?  I do, because I have a 3 year old who asks me daily (often more than once) if it’s Christmastime yet, where Santa is and when he’s coming.

I’ve recently started introducing to Benjamin the idea of a Christmas list:  the idea that when he wants something, rather than demanding it today, we write it down and ask Santa for it at Christmas.  The idea seems to be taking root. 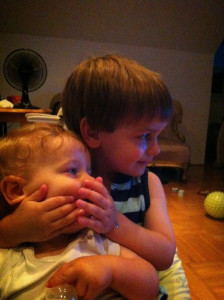 He decided, the other day, that he would like a red kite.  I told him we should write it down on our list for Santa.  He told me that he actually wants two things from Santa:  a red kite, and a yellow kite for Liam to chew on.

My 3 year old just asked for 2 things for Christmas, and one of them is for his brother.  I acknowledge that the request for the yellow kite for Liam was probably self-serving (if he has a kite to chew on then he won’t chew on mine), and that his Christmas list will grow in the next few months, but, still, it’s a cute and sweet thought for him to have.

I have great kids.