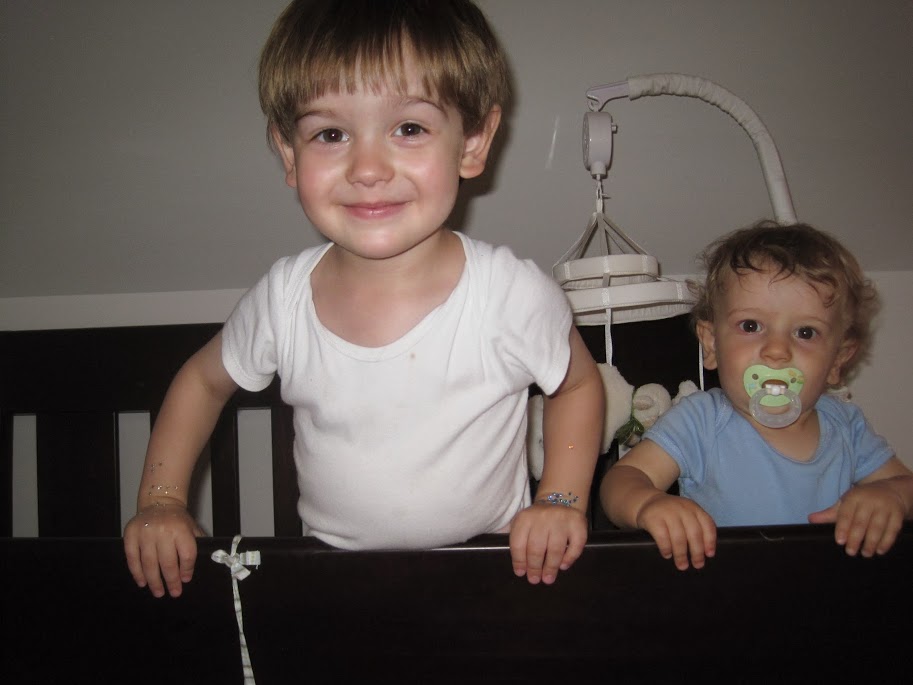 I have two amazing brothers, both younger than me (although in Peter’s case, not by much).  (I also have three sisters, but this post isn’t about them.)  Growing up, both Peter and Adam drove me crazy — they often terrorized my toys and took immense pleasure in destroying my overly particular way of doing just about everything.  But, even when we were little, and tormenting each other, we were always there for each other, and we all loved each other very much . . . and we all knew it, even when we didn’t want to admit it.

As adults, they are the best of friends (even though I suspect they still drive each other crazy from time to time).  They work together, they share hobbies, and even bought a house together.  They take care of each other, look out for each other, and set each other straight when necessary.  Although I love my brothers very much (and miss them terribly since I’ve been gone) there is a closeness that they share which I don’t.

I see my boys together, and, even as young as they are, I see the same type of bond forming.  Nothing brings more joy to Liam than seeing Benjamin.  When Benjamin walks into the room, Liam smiles and giggles and wrestles free in order to get down and crawl (at warp speed) to Benjamin’s side.  Even at just 10 months old, he wants to be with his big brother and wants to be doing what he’s doing (which is already getting him in trouble).  Benjamin gets frustrated with Liam, to be sure (“Don’t eat that!  Don’t touch that!  That’s MINE!”) but he is so kind and sensitive to his little brother.  He already watches him and supervises what he’s doing — and not just for self-centered reasons.  He lets me know when “Liam’s playing with a toy that’s not good for babies” and today even directed him away from playing with the oscillating fan in the living room.  If I need to do something Liam objects to (anything that requires he be restrained, like diaper changes) Benjamin will come and tell me, “Mommy, he doesn’t like that”.  He routinely tells me, “I love my brother!” and “I love my little Liam!”.  I suspect I will see this adoration/protection duet play out for many years to come.  It’s amazing to watch my children love each other the way that they do.

There is really something special about brothers.  I am so happy that my boys have each other.  I’ve always thought I had the best brothers ever . . . but I think they have some competition.