People in Austria are very forthcoming with their disapproval — be it stares, scowls or comments.  This seems to be especially true when it comes to kids and dogs.  If you’re out with a dog or a small child, it’s open season for opinions.  This is actually relatively true at home, too (more so with kids than with dogs) and it starts as soon as you’re visibly pregnant — other people (typically, but not always, women older than yourself) will confront you with advice about everything from your beverage of choice to your choice of footwear to prognostications on the sex of the baby.  I remember the frustration of being confronted by complete strangers about my choices or behavior when I was pregnant with Benjamin, and thinking that it would go away once he was born.  It didn’t — and now it’s followed me to Europe!

But, here, I don’t care so much.  I don’t understand what they’re saying anyway.

On my way home from German class today, on the train, with both kids, I noticed an older woman who was scowling and who looked generally disgruntled.  When I got off the train at our stop, I proceeded to the elevator.  Waiting for it to arrive, this same woman came up and said something to me in German.  She wasn’t angry or overly confrontational, but she did seem stern and grumpy.  Taken by surprise, I didn’t catch a single word, so I asked (in German!) for her to repeat herself.  She did, more slowly, and the only words I caught were “children”, “seat” (maybe “sitting”?) and “street car”.  (I imagine she actually meant train.)  I told her I only speak a tiny bit of German, so she repeated herself again, more slowly and more loudly.  I still didn’t get it, so I nodded and smiled and got on the elevator. 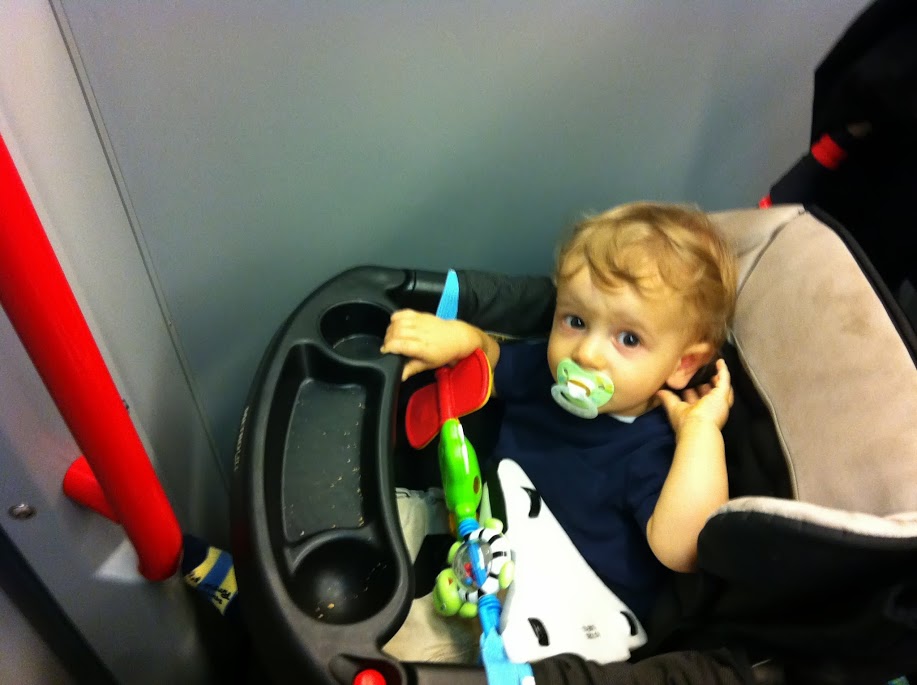 I have no idea what she was saying.  It might have been something very nice, and she’s just a stern looking person.  She might have been admonishing the other passengers for not giving up their seats so I could sit on the train.  But I suspect she was telling me I ought to sit down on the train with my kids (which, I would love to do, but for logistical reasons isn’t something I can do when I travel with both kids together — I won’t leave Liam in the stroller parked next to the door, and I won’t let Benjamin sit in a seat out of my reach, so if the seat immediately adjacent to where I’m standing isn’t available, Benjamin & I both stand).

If I’d been able to understand her, I would have either gotten defensive or agreed out of politeness — but either way, it would have stayed with me all day.  I would have been justifying myself in my mind, and feeling grumpy and bitter that she dared say anything.  Regardless of how confident I was in my own opinion, her words would have stuck with me, for the rest of day or even longer.

But, here, I’m immune.  I don’t know what she said, so I can only obsess about it so much.  I can try to imagine what she was saying, but I really don’t have enough information to even make an educated guess.  So, I let it go.  It doessn’t stick to me.  The truth is, there’s no reason I shouldn’t feel exactly the same way if I do understand what the other person is saying.  I’m doing the best I can, and, if someone offers me new information, I have the option of changing my behavior in the future.  The judgements of a stranger should carry no weight.  I’ve figured out how to feel that way, finally:  fail to understand the criticism in the first place.