Benjamin has been asking for months to go to work with Dan.  We’ve stopped by a couple of times to visit, and I even dropped him off for a few hours once (so I could do his birthday shopping) but that isn’t what he wanted.  He wanted to go in with Dan — to get ready in the morning and head off on the train with his dad. 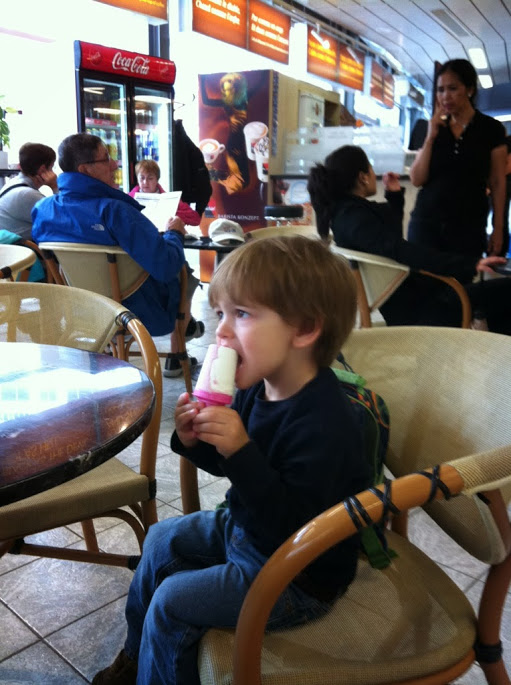 This morning, that’s what we did.  He got up, had breakfast, got ready, packed his backpack and went to work.  As I understand it, they had a good time (even though B got bored pretty quickly, he was a good “helper” all morning).  For me, it was really weird.  The only time I’ve had such a long block of time without him was the one time Dan took him to the emergency room and I stayed home with Liam.  Nearly every day, Liam is awake during Benjamin’s nap, and I kept forgetting he wasn’t here and asleep in the other room — I kept shushing Liam while we were playing together.

I did enjoy my time with Liam.  He crawled all over and even cruised a little.  It was fun to be able to play with whatever toy he wanted without Benjamin determining what Liam is or isn’t allowed to play with.  But mostly, I missed him, a lot.  I’ve grown very used to spending my days with both of my kids.  Sometimes we play, sometimes we go out, sometimes he helps me with the chores, but I really enjoy our morning time, whatever we do with it.

(It might have been a bit of a nice break except for the fact that I couldn’t go out — we were supposed to have some guys from the power company come by this morning, although they didn’t.)

At lunch time, Dan brought him home.  Liam and I were both so happy to see him.  He had a nice time with Daddy at his work, but he was happy to be home, too.

When he starts school in September, this is what it will be like in the mornings, 5 days a week.  I am not prepared.  I think it will be what’s best for him, but I don’t think it’s what will be best for me.  If I were selfish, I wouldn’t send him to school — I don’t want to be without him.