When we first moved here, we found ourselves paralyzed when it came to language — the prospect of trying to communicate at all when we knew so little prevented us from even trying most of the time.  Shortly after arriving here, I had an experience of being so traumatized when it came to communication that I even had trouble speaking English to another native speaker.  One of Dan’s friends described the experience as “a language traffic jam in your head”.  That’s exactly what it’s like — the brain processes dealing with language become so overloaded that even simple communication becomes difficult, slow and stressful.

Luckily, that first phase was temporary — we’re doing a lot better now.  We have some German we’re pretty comfortable using (“excuse me”, “I’m sorry”, words used in restaurants and grocery stores and various other words and phrases we’ve picked up) and we’re getting less embarrassed about resorting to English when we need to.  Dan will use Spanish when both English and German fail, and I’ll throw in some of the French I know.  Usually, between all those options, something will work out, and when it doesn’t, improvised sign language will.

Tonight, we tried a new restaurant near our house — an Italian place.  We had an Italian waiter who spoke less German than we do, and no English.  That threw us, a bit, at first.  We’ve gotten to the point of being really comfortable reading menus and ordering in German (even though many places offer English menus, we won’t always request one) and I think this is the first time we’ve failed with both German and English.  After a couple of failed attempts, Dan ended up using Spanish, and although we understood very little of what the waiter said, he apparently understood enough Spanish to make things work. 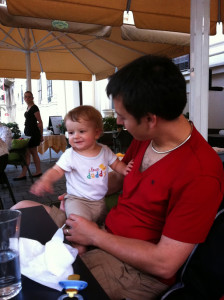 Over the course of the meal, we chatted a bit (really) and learned that he’s been here as long as we have and that he, also, has two little kids (although his kids are a little older than ours, and he’s a little younger than we are).

At one point, watching this scene where our Italian waiter, Austrian hostess, Dan, myself and the kids were all interacting, I realized how far we’ve come in terms of communication, and very little of it is because we’re getting better at German.  We’re being more confident and less self-conscious, and ever more aware of the benefit that we can get just from putting ourselves out there a little.  This is quite an adventure, and it’s changing us.