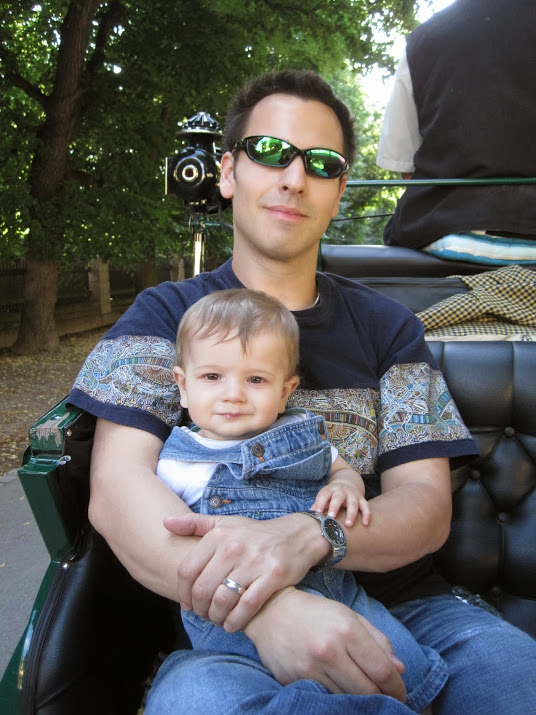 Yesterday was my & Dan’s 11th wedding anniversary, and we decided to divide the celebration into two pieces — one, because our plans included the kids and two, because then you get to celebrate on two days, and what’s the downside to that?  I say “we” decided, but it was really me — Dan & I have had a tradition (now 8 years old) of taking turns planning our anniversary celebration.  We mostly do it as a surprise for the other, and it really makes it a lot of fun — rather than compromising and collaborating every year, we take turns, so we alternately get the fun of making and executing the plans or enjoying the surprise. 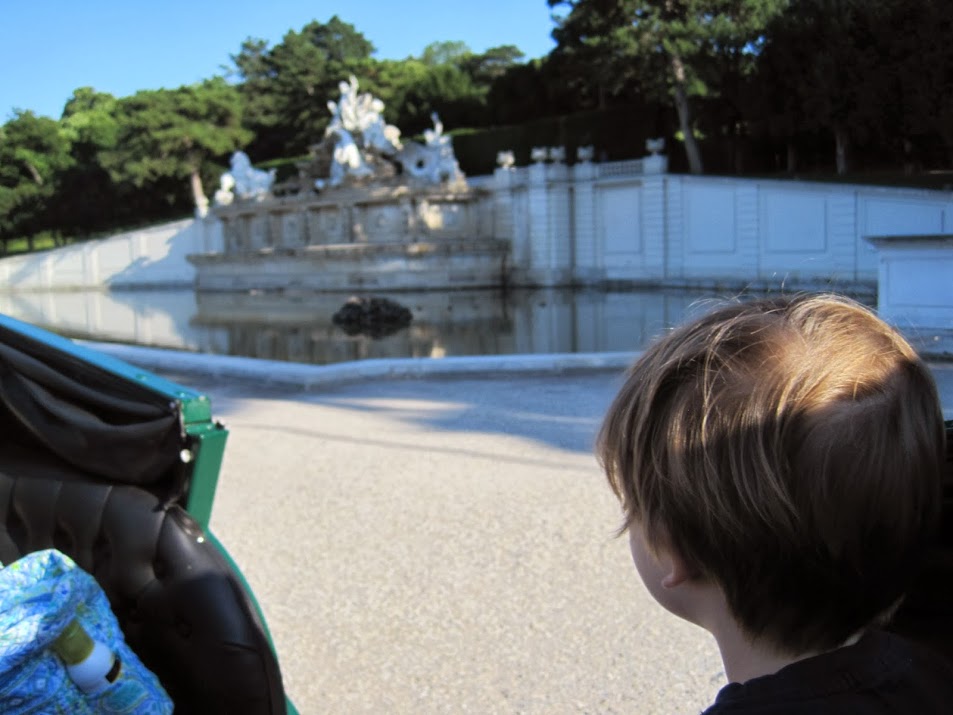 Yesterday, Dan came home from work a bit early and we packed the kids up and headed out to the Schonbrun Palace.  Even though I’ve now seen a bit more of the city, 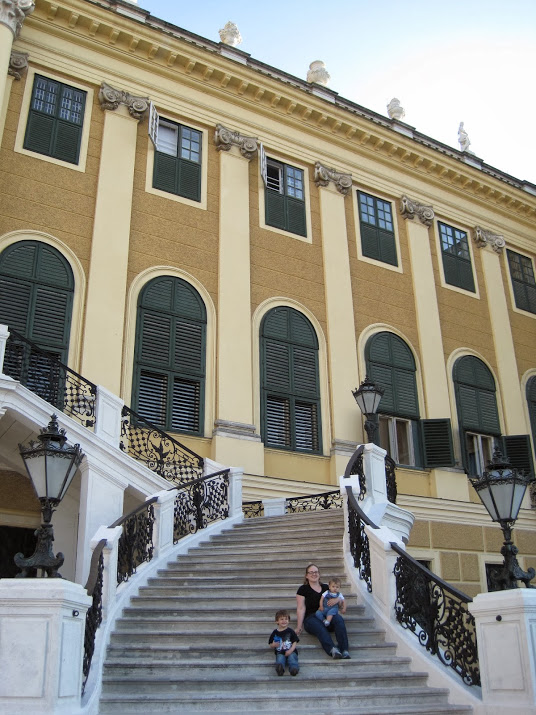 I still think it’s the most beautiful part that I’ve seen so far.  We hired a horse & carriage, and rode all around the grounds of the palace.  It was lovely — the grounds are beautiful and peaceful, and seeing them in a carriage really lets you imagine yourself in a different era, pulling up in front of one of the grandest palaces of all time.  Pretty amazing.  And the kids did great:  Benjamin loved it (he’s been asking to go on a “horse trailer ride” since we got here) and even Liam did pretty well for most of the ride.  We finished up with a quick dinner (it was getting late) at the cafe at the palace, and then made it home before the rain started. 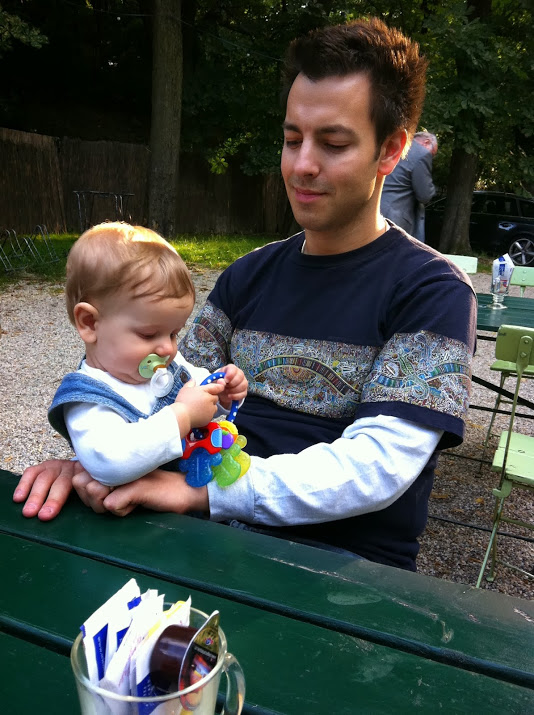 I had also picked out a restaurant that I thought would be reasonably romantic and kid-friendly at the same time (not the easiest of tasks).  We saved that for tonight, so this evening we rode the tram and a bus out to the west of Vienna, and up onto the closest “berg” to the city.  It was perfect.  It was reasonably busy without being crowded, but there was plenty of room for Benjamin to run laps around the table without being in anyone’s way.  The outside seating was shaded from all but some dappled sunlight, and as the evening came on, it was cool but not too chilly (reminded me more of late September than June).  The view was amazing:  you could look across the garden and outdoor seating and look right onto Vienna and the mountains beyond.  There was a little overlook at the edge of the yard where we went and found exactly where we live (or, at least, the church on the next block, so near enough).  And there was a wedding reception going on in a little hall beside the garden seating, which just seemed perfect.  We ate, we drank wine, we explored with Benjamin and cuddled Liam.  We stayed out much later than we usually do and then we trekked back home and put the kids to bed.  It was lovely. 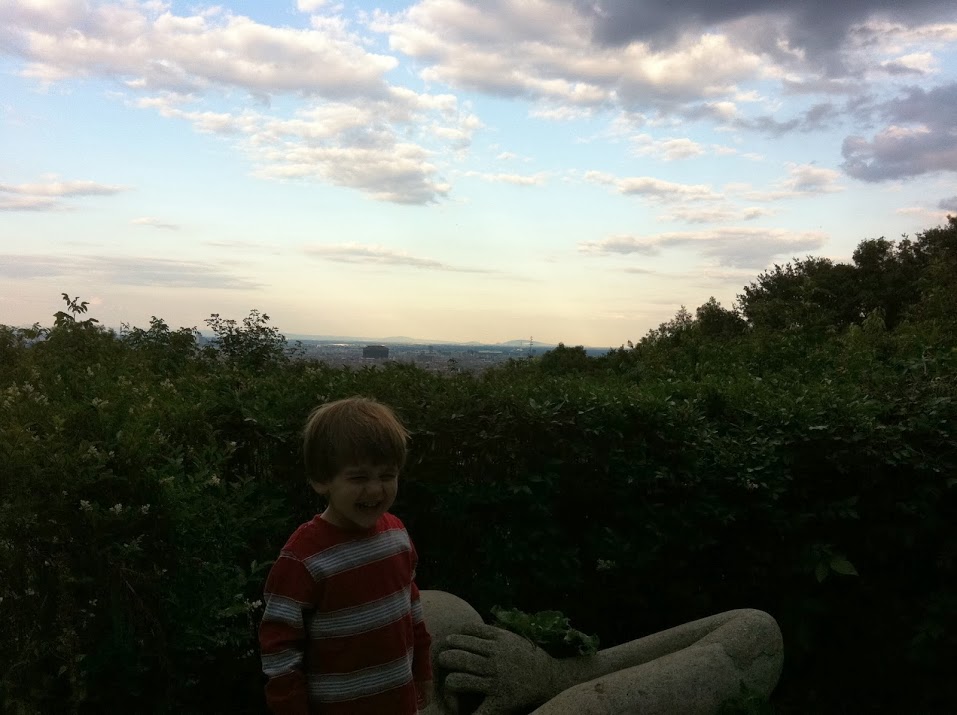 And, it wasn’t diminished in the least by having the kids with us.  We usually make a point of going out on our anniversary alone together, but that wasn’t an option this year, as we don’t have childcare established yet.  I thought it was wonderful to have Benjamin and Liam with us, both for our “horse trailer ride” yesterday and for our dinner today.  We explained to Benjamin that we were celebrating our anniversary, and he asked lots of questions and told us both “Happy Anniversary!” several times.  It was wonderful to include them in our celebration.  I’m sure there will be times in the future where we’ll enjoy some alone time for our anniversary, but this year, our celebration was absolutely perfect and I would not have changed a single thing.