We’ve been in Vienna long enough to start to get accustomed to certain things:  we’re used to sharing the sidewalks with bikes (who have the right of way over pedestrians), we’re in the habit of doing all of our grocery shopping on Saturday so we aren’t stuck on Sunday without something important (since the stores aren’t open) and we’re beginning to abandon the idea of waiting in any kind of an organized line for anything (since the Austrians don’t put much emphasis on waiting and turns — he who jumps to the front the quickest gets served the fastest).  In general, we’re catching on.

We’ve also gotten used to the fact that horse-drawn carriages share the roads with the cars — with surprising ease and patience from all (mostly).  I’m amazed and impressed at the confidence and success with which the drivers maneuver through traffic and down narrow streets, all while avoiding cars, trucks, buses, tourists (children included), bicycles and each other.  Many of the places that we frequent — our favorite pizza place, our favorite coffee places, the walking route I take with the boys in the morning and even the street in front of our house — are on the route typically taken by Viennese carriage drivers as they give their passengers a tour of the city center.  So, we’ve also started to recognize the horses and drivers themselves.

Not surprisingly, I have a favorite.  The horses are medium sized, but built like ponies, and they have a pleasant, sound gait, happy expressions and a relaxed manner.  The driver (a woman) always seems very aware of her horses, but not in an anxious way — she’s keeping an eye out for them.  Many of the carriage pairs here appear more high-strung:  heads in the air, prancing and even cantering away from a stop for traffic and working up a nervous lather before the day has even started.  And many of the drivers appear otherwise occupied:  speaking on cell phones and listening to ipods are both common.  So, in our ventures around the city, I’ve kept an eye out for a gray pair (there are several) and their driver.  We haven’t done it yet, but we will soon avail ourselves of a “horse trailer ride” (as Benjamin says) and I’ve picked out my set.

On our morning walk, we came upon our flea-bitten gray (that’s a color, not a condition) pair and their driver, just as they were getting set for the day.  I was thrilled to find out where she “camps out” for hires — I had suspected she wouldn’t be in the busiest part of town.  I know better than to ask if we can pat the horses (it’s not quite as egregious as asking if you can pet a seeing-eye-dog, but still not cool — these animals are working) but Benjamin wanted to look at them, so we found a bench near where the driver was getting ready for the day, and we watched.  We were all out on our walk:  me, Benjamin, Liam, Dan & Bailey.  After a few moments, the driver took notice of us and asked if we spoke German, when we shook our heads, she asked about English and proceeded to engage us in conversation.  At first, she was curious about Bailey, but as the conversation went on, we complimented her and her horses, and told her how we’d taken notice of them (you never know how even a compliment is going to go over when the communication isn’t great, but I think she understood).  She asked about us, our trip to Austria, the kids and Bailey.  We talked about our horses at home and about her horses (and Dan remembered to ask where the carriage horses were typically stabled, which is something I’d been wondering about since I got here). 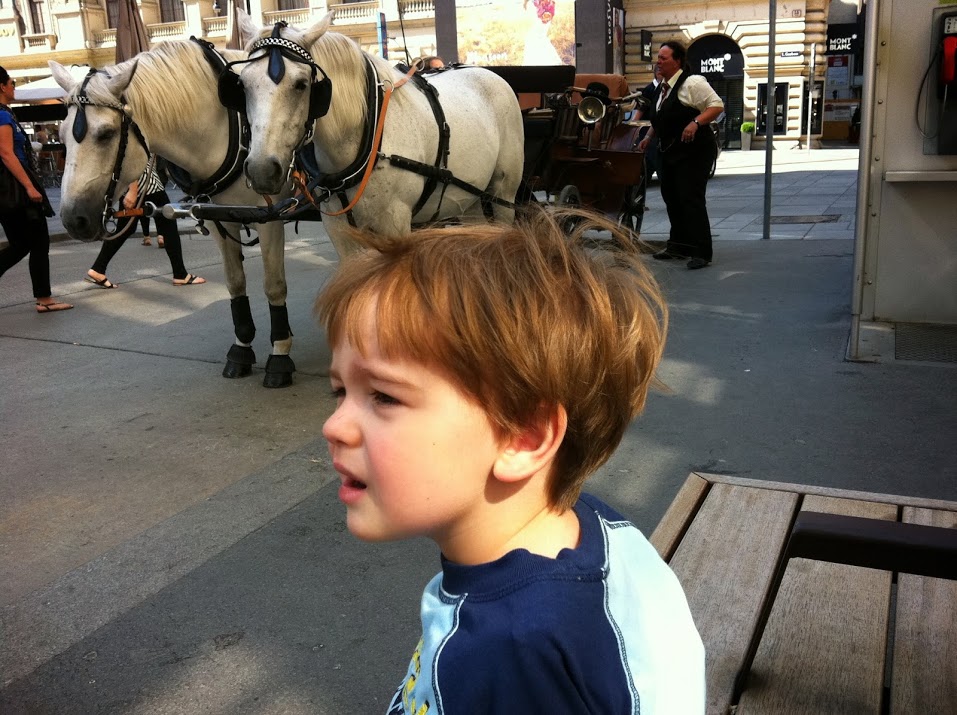 It was fun to talk to her.  She values the same things in her horses I had noticed (of course).  It’s no accident she’s not set up in the busiest part of town — it would be too stressful for her horses (and for her).  She stables her horses as close as possible to where she works (why would she ask them to go further than necessary?).  I noticed that one of her horses doesn’t wear blinders, which is rare (and neither of them wear ear covers, which is also unusual, but less so).  She told us that she (the horses) doesn’t need them, so she doesn’t bother — and while we were talking, a taxi cab drove about 18″ from the horse without blinders, who didn’t do more than swish her tail.  It was great to “talk horses” with someone, especially someone who I understood so well, even without communicating too clearly.  We got her information, and she will definitely be the carriage we hire when we decide to go on our “horse trailer ride”.

We are horsewomen of the same ilk, which I actually knew before I talked to her:  her horses had already told me.