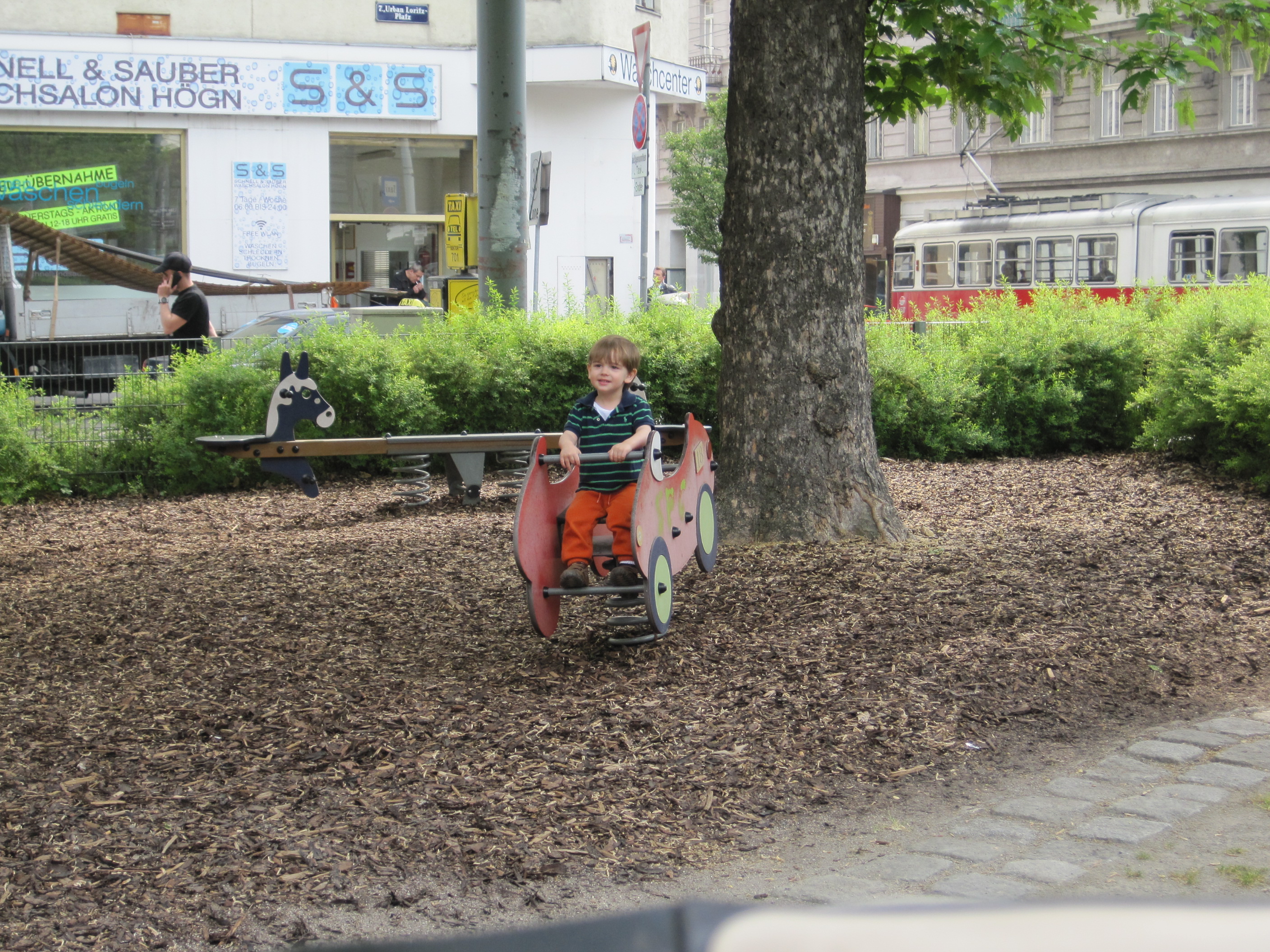 Much (if not most) of the playground equipment in Vienna would never exist these days in the US.  It would either be outlawed by lawsuit-fearing local regulators or dismantled in the dark of night by overprotective soccer moms.  A lot of it is reminiscent of the playgrounds I played on as a kid:  the equipment is made of metal and wood, it’s too high, there aren’t guardrails, the ground is sometimes just ground or wood chips (not cushy recycled rubber), there are uncovered sandboxes, the swings still hang from chains and the slides probably get very hot in the summer time.  But, they go beyond that, too.  They have tables and planks set on springs, which are designed to be unstable and to be fun to balance on (but also challenging for a little kid).  There was an actual zip line in a park we went to last week — no signs or fences or anything to prevent a kid walking under it from getting clobbered by the kid on the zip line.  Several of the parks we’ve been to even have some kind of running water feature.

The one we went to today had a water pump (complete with pinching hazard!) that poured water onto large rocks.  Actual rocks.  Big, hard, jaggedy rocks — larger than basketballs — which were part of the sandbox area .  It is a huge culture shock for me.  I can’t help it — I’m a product of my socialization.  All I could think of was how I needed to prevent Benjamin from pinching his fingers in the pump, or hitting himself or another kid in the head with the pump handle, and then, once the water was running, make sure he didn’t slip on the (now wet) large, jaggedy rocks and crack his head open or knock out some teeth.  So, of course, I did all of those things.  But I can tell the Austrians are rubbing off on me, at least a little.  Because although I had a strong desire to protect my child from all of these perceived dangers, I also realize that we’ve been here 3+ weeks, and we’ve been to a lot of playgrounds and I’ve seen a lot of kids playing on what are (to my American sensibilities) complete deathtraps of playground equipment.  And I have yet to witness a single injury. 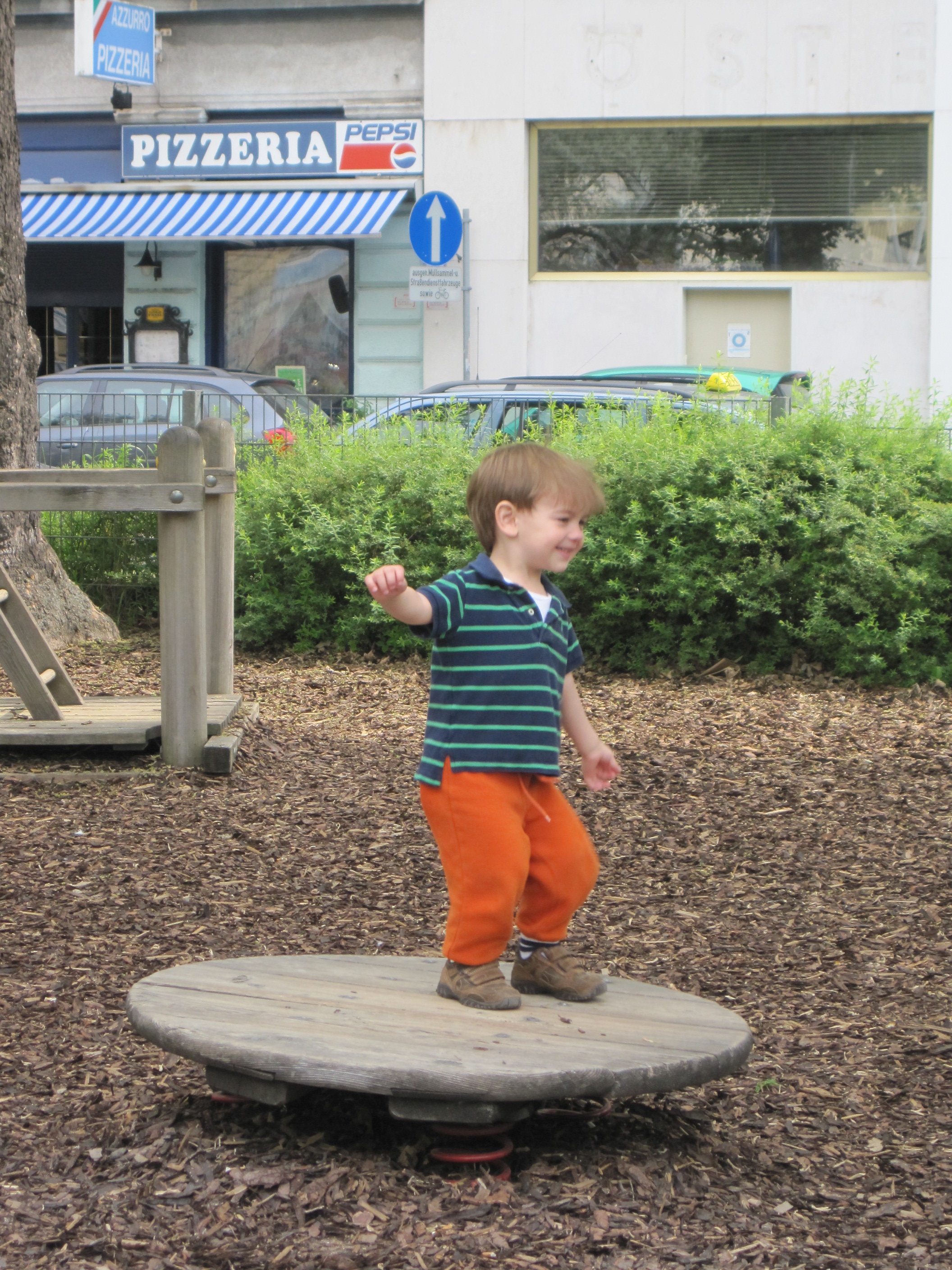 I’m not blind to the fact that they could still get hurt (and probably do).  But I’m beginning to remember that with proper guidance and supervision, a child can actually play in a world that is not completely bubble wrapped for the sake of their protection.  (My father will read this and be horrified that it took a move to Europe to remind me of an idea he raised me with — and one that still exists in his backyard.)  I’ve known it, intellectually, but it’s been a rare event that I’ve had to use my own judgement on whether a piece of playground equipment is safe for Benjamin back in the states (other than maybe not being age appropriate).

Today, Benjamin made a friend at the playground, whose name is Alex.  They played in the sandbox with Alex’s truck and shovels, used the water pump, played on the swings and the slide and the see-saw.  They were very well supervised my us and by Alex’s grandma.  I did not hover, or hold his hand 100% of the time, and still, no one got hurt.  (Benjamin was even willing to give Alex back his dumptruck before we left the park.  Success!)

1 thought on “Playing in Vienna”