Today was one of those days.  I’ve often said to Dan that these are the days where you make it across the finish line, but rather than making it in one piece, you come across sideways, running on fumes, covered in dirt, with 3 flat tires and a bumper that is hanging off.  That’s what today was like:  we made it, but it wasn’t pretty.

Dan left for work this morning, and I got B some breakfast, fed Liam and played with both of them together.  Shortly after putting Liam down for his first nap of the day (sitting up really wears him out!) B started running laps around the living room.  I looked for potential dangers and didn’t see any — I got the power cords out of the way and moved the sharp-cornered furniture . . . but still, he fell (inevitably) and bumped his poor little nose.  My poor guy — it doesn’t seem to be bad, but I think it really hurt. 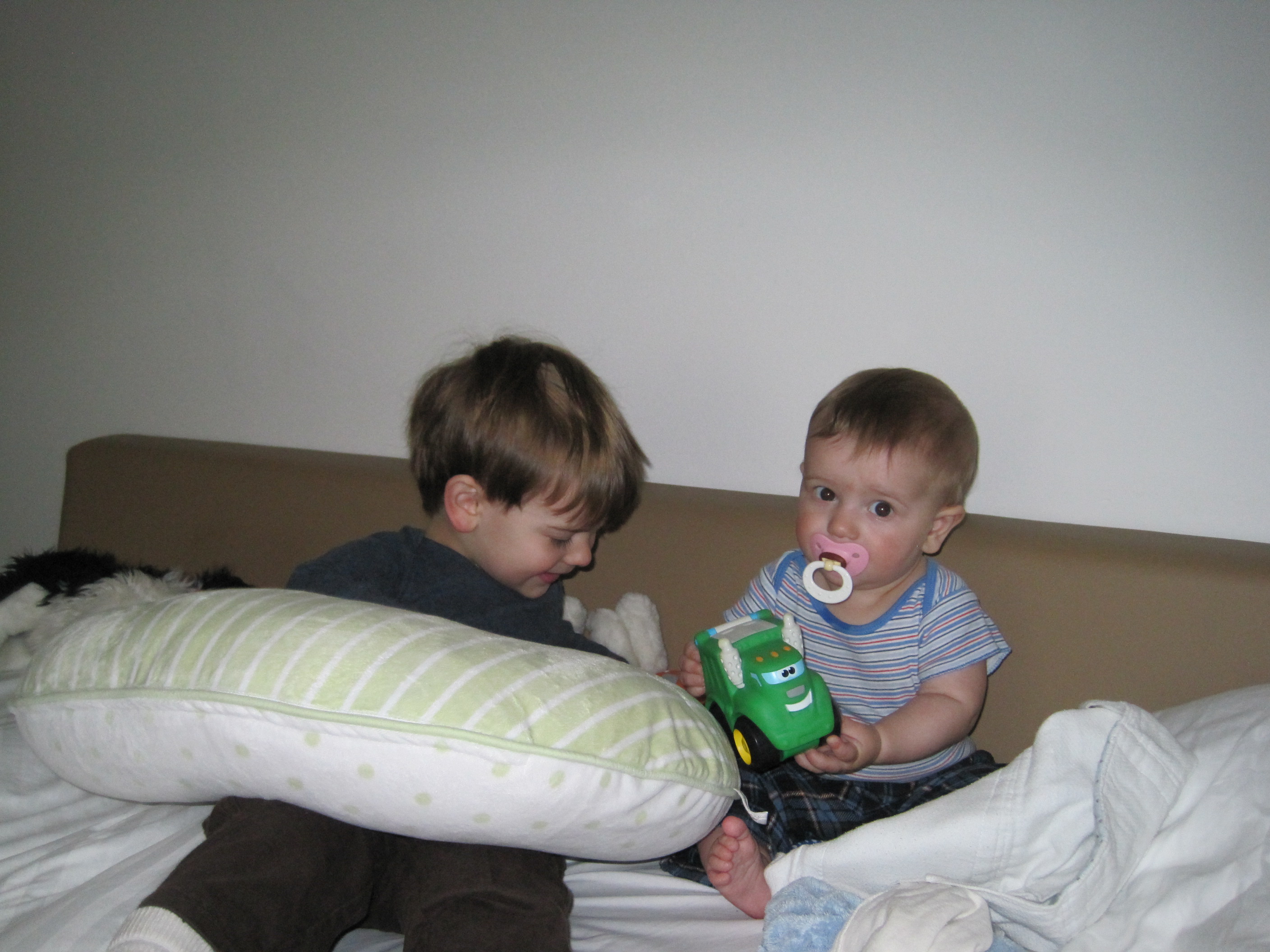 Of course, the kids decided to take turns taking naps — Liam slept for an hour or so while Benjamin was falling and injuring himself, and then just as I was putting B down, Liam woke up.  I got B down, Liam got up and was up for almost 2 hours while Benjamin napped, and then he started getting sleepy.  Just as I was getting him back down (literally, as I’m carrying him in to put him in his bed) B wakes up again.  Sigh.  No rest for Mommy today!

Right after everyone woke up, the cleaning lady showed up.  She’s very nice (near as I can tell) but doesn’t speak a word of English — literally, I speak more German than she does English.  I decided to try to get out of her way, but couldn’t communicate that, so I just got myself and the kids ready to go as fast as I could so we could get out of here.  But, it took us so long to get ourselves together that by the time I got Liam in the stroller and Benjamin dressed, she was done.  Even though that’s really fine, and we didn’t have anywhere to be, it was a little discouraging. 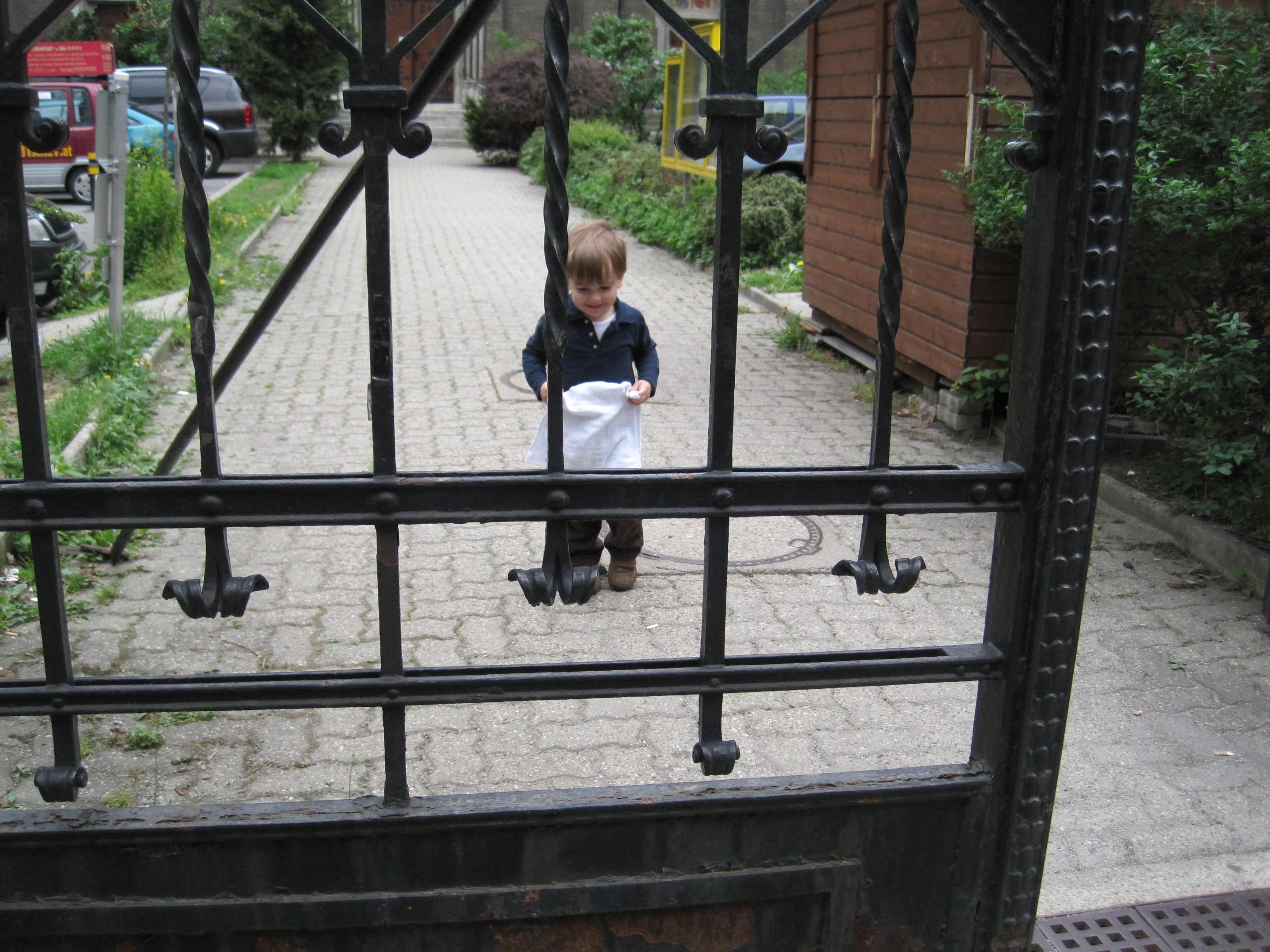 But, Benjamin was excited to go out, and he kept saying, “That was so nice of her!” about the cleaning lady — it was just too cute for me to stay frustrated.  So, we went out, B with his “do” in hand.  (A “do” is a cloth diaper/burp cloth.  Benjamin coined the term “do” as one of his first words — at first, it meant, “that thing I want” but eventually ended up meaning just those cloths.  Since the term is actually more succinct than what they’re actually called, we’ve adopted it, too.  He has a bunch of them, and they’ve kind of become his little security blankets.)  We had a lovely walk.  It was raining a little, but I was holding Benjamin’s hand and talking about the things he saw, and pushing my happy little Liam in the stroller.  We even stopped for a hot chocolate for me and a chocolate milk for B.  We had a great time.

That is, until we got home, and I realized the “do” that had gone out with us had not come back.  Uh-oh.  So, out we went, into the rain, again, retracing our steps.  I was pretty sure that if it was anywhere, it would be at the bakery where we got our hot chocolate and chocolate milk.  We made it all the way back, but it wasn’t there.  We looked all around, and followed our whole path, but we couldn’t find it.  We even went back to the bakery a second time, just to be sure.  Nope.  Poor Benjamin was pretty heartbroken.  It’s really the first time he’s lost something.  He kept asking me where it was and could I find it.  I had to say it was lost, and no, I couldn’t.  He cried.  It was awful.  He has others, but I know that’s not the point — he’s upset that it didn’t come home with us.

So, it’s been one of those days.  We got through.  We made it.  No points for style, but I think I’ve pretty much given that up for now, anyway.  But Liam is sleeping, B is in the bath and Dan is home.  And tomorrow, we go again.