Part of preparing for our move involved separating everything in our house into one of four categories:  air shipment, sea shipment, storage and things to pack in suitcases.  The idea is for the air shipment to arrive 10 – 14 days after it’s shipped (to provide things you don’t immediately need in your suitcase, but to tide you over until most of your stuff arrives) because the sea shipment doesn’t arrive for 4-6 weeks after it’s shipped.  Since Easter is happening almost 3 weeks after we left, I made sure to pack everything we needed for Easter in the air shipment.  It’s not a religious holiday in our family, just a tradition, but I was careful to plan to have the things I’d need when we arrived.  I packed up cute Easter hand towels for the kitchen, and stuff to decorate eggs, but most importantly, Benjamin & Liam’s Easter baskets and the things that were to go inside of them.

Well, one of the wrinkles with the whole paperwork/red tape is that we can’t access our air shipment.  It’s here, in Austria — it has been for about 10 days.  But, without some of the paperwork, which we can’t get until Dan actually starts work, we can’t get to it.  This has caused a lot of frustration, because there were a lot of things in there that we were counting on having sooner rather than later.  But nothing has been as disappointing to me as not having the Easter things for the kids.

Given that Friday is a holiday here, I finally accepted today that we really aren’t going to get our air shipment before Easter.  I’m disappointed.  But that’s not going to stop the Easter Bunny from visiting us here in Austria, so today, we went shopping.

We all headed off to the mall together, and Dan distracted the kids while I went to play the Easter Bunny’s helper.  I didn’t want to replace their Easter baskets, since we have perfectly nice ones that we just can’t get to, but which will available for subsequent Easters, so we found cute Easter-themed gift bags which should work well.  Then, I set off to fill them.  Since Liam is only 6 months old, and B doesn’t need any more sugar than his current gelato habit provides, I decided to go with toys, rather than candy.  I ended up spending about twice what I’d been planning (I found the perfect thing for B, but had to decide between two things, and then found the perfect thing for Liam, but it was really expensive, and after searching for something less expensive, I gave up, 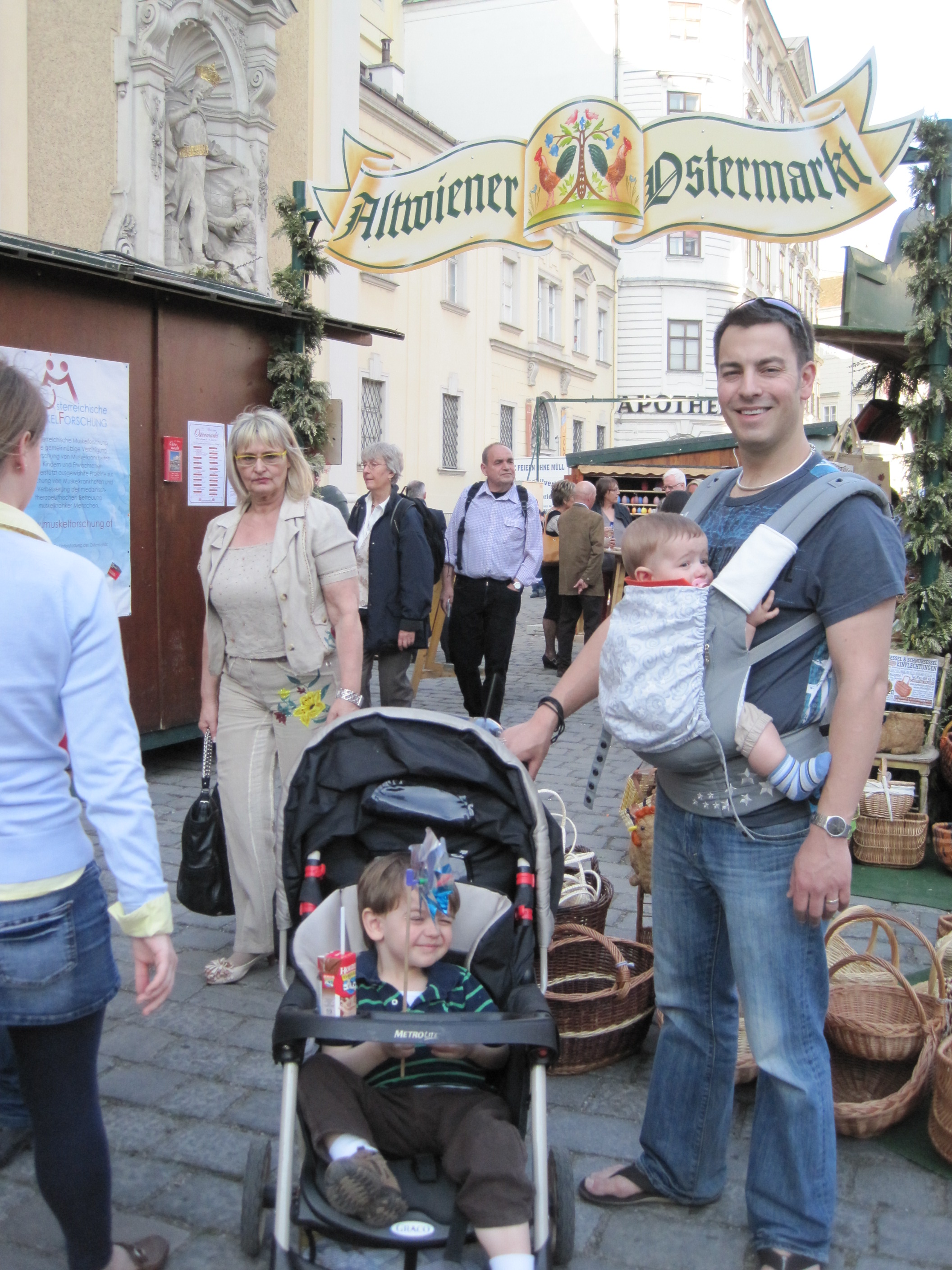 bought it, and went ahead and bought BOTH things for Benjamin because his things were so much less expensive — which was less about needing things to be even and more about justifying to myself buying both, which I really wanted to do in the first place).  Dan was supportive of my decisions when I got back, so we called it a success and headed home.

It feels good to make Easter happen.  A lot of what Easter is for my family is a time to get together — we’re not going to get to do that this year, which is enough of a loss.  I was really sad that I ALSO wasn’t going to have all of the right stuff to make their baskets, but it feels really good to improvise with what I have available.  I know that, right now, it means more to me than it does to my kids, but it feels good to make it happen, just the same.